Fried chicken has always been popular in our family. Probably it is in most families. And there have been lots of family cooks who have staked their reputation on their version of the delicacy.

My mother was celebrated among her family contemporaries as the champion, and her special family dinner was always fried chicken, mashed potatoes and cream gravy. A picnic in the mountains was an anticipated treat of childhood. My mother would fry up two chickens, pack them into a big glass jar that she reserved for the occasion, and arrange the jar in the back window of our Willys Overland Americar to keep the chicken warm until we reached our destination. (Why none of us ever came down with a fatal food-borne illness I will never know.) At the picnic table we would reach into the jar and pull out a favorite piece – or the back if we were too late. There was never any chicken left.

My mother-in-law often served fried chicken when family had gathered around her table at the farm. The crispy skin and juicy meat  stimulated sibling rivalry at the table, sometimes triggereing mild rebuke from PopPop, the patriarch, who had high expectations for table manners.

Susan and Carol also make some mean versions of fried chicken, but Susan has largely turned from cooking to gardening, and Carol doesn’t like to fry things. So, for a recent Sunday family dinner I decided to make fried chicken (one of Carol’s all-time favorite foods) with salt-crusted fingerling potatoes instead of the usual mashers but keeping the traditional cream gravy.

Inspired by a recent visit to RT Rotisserie, I have been thinking about fried chicken a lot lately. RT ages its chickens before roasting them on the rotisserie. The cooks arrange trussed chickens on big racks in a large cold room in order to dry them a bit and make the skin crispier. That’s similar to what is done to make the skin on Peking duck so crispy. 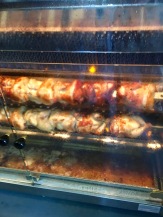 Also, I have become interested in slower cooking: a potato baked longer at a lower temperature seems fluffier, and a braise at a lower temperature seems more flavorful. (Think crock pot?) Usually I start frying chicken at a high temperature until it is brown and then reduce the temperature to complete the cooking. I thought that I would give “slow from the start” a chance. All in all, my experiments turned out ok. I thought the chicken was crispy and tasty. What more can one ask? One important thing I did learn was that when you fry chicken at a lower temperature be sure to get the skin as dark as you want it before you turn it. Turn each chicken piece only once; otherwise it will stick to the pan and you’ll lose the crispy skin that you have been trying so hard to achieve. 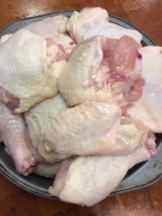 In the frying pan

Turns out there is another version of chicken and waffles. It traces its origins to the Pennsylvania Dutch area around Lancaster, Pennsylvania. The dish is essentially the filling for chicken pot pie served on top of a waffle. To me, that is an interesting concept, and one that sounds like it might be delicious. My mother’s family traces its origins from Pennsylvania Dutch country through Wisconsin, Iowa, and eventually South Dakota. My wife’s family hails from Wilmington, Delaware, just a short drive to Lancaster. I don’t remember chicken and waffles ever showing up on either family table.

That made me think that maybe a Southwestern version of chicken and waffles incorporating some regional ingredients would make a good alternative to either of the better known traditions. Blue cornmeal waffles seemed like a good starting place. Green chiles and piñon nuts would serve as tasty additions. To brighten up an otherwise monochromatic dish, I topped it all with pico de gallo. For that, you probably have your own recipe. If you don’t, I’ve added one without the kick (There is a serious medical reaction to capsaicin in our household) but you are encouraged to zip it up to your own tastes.  So here it is: Santa Fe Style Chicken and Waffles with blue cornmeal waffles and green chile chicken sauce. If you can’t find blue cornmeal at your local store, you can order some from Talon de Gato farms. Otherwise, substituting yellow or white cornmeal is perfectly acceptable.

Batter in the waffle iron

Place two waffles on each plate. Top with about 1½ cups of the green chile chicken sauce. Garnish with pico de gallo. Serve immediately with more optional Cholula sauce, if desired.

Disclaimer: This is not an authentic recipe for shakshouka. For one thing, it includes fried chicken. For another, it uses Swiss cheese. Also, I do not plan to take sides in the various controversies as to whether the dish should be viewed as Tunisian or Israeli or whether it should be viewed as a breakfast dish or served at an evening meal. I can only reaffirm that shakshouka is easy to make and delicious.