A while back, my friend, John Ed, and I made a batch of Andouille sausage. We used a recipe from an excellent book, Charcuterie: The Craft of Salting, Smoking, and Curing, Michael Ruhlman and Brian Polcyn, W.W. Norton and Co., New York and London, 2005. We wound up with more than we had anticipated, so I put some of it in the freezer. The other night when I woke at 3 AM and couldn’t get back to sleep, I decided to reorganize the freezer. (What else is there to do at three in the morning?) I came across the Andouille and thought a bowl of gumbo would be good during the changing fall season.

I wasn’t sure, though, how the sausage would taste after those many month of storage, so I made a quicky throw-together meal to try it out. The meal turned out better than I expected, and the Andouille was in good shape. Next on the schedule, then, is chicken and Andouille gumbo.

For making the sausage, you should have a stand mixer which can be fitted with a meat grinder/sausage stuffer attachment. You will also need some sausage-making supplies including “pink salt” (DQ Curing Salt, aka DC Curing Salt, aka Prague Powder #1, aka Insta-Cure, aka Modern Cure.) Whatever the name, the salt is a mixture of regular salt and 6.25% sodium nitrite. The sodium nitrite prevents bacterial growth, especially the organism that cause botulism. You will also need sausage casings, preferably medium natural hog. If you live in a big city you can probably find those things in a local meat-packing or butcher supply house. If you can’t find them, you can get them on-line from Butcher and Packer

The quick dish is basically tomato sauce and cooked spaghetti, but the flavorings from the Andouille season the mixture beautifully. Few dishes to wash, and you can get back to whatever you are doing.

Sausage stuffing attachment at the ready

Another view of the meat grinder/sausage stuffer

Nearly every cuisine I’m aware of has a deep-fried fritter that is puffy and flaky. The Northern New Mexico version is the sopaipilla. I first had them during a visit with my aunt and uncle in Los Alamos when I was ten yers old. I liked the treat so much that I brought the recipe back home with me and tried to make them – probably with not much success. Since then I’ve had countless sopaipillas, some delicious, some not very good, some light and fluffy, some greasy.

The most memorable sopaipillas I never had were at the Cactus Taqueria in Dumas, Texas. On a long road trip, our family had stopped for lunch. After we had placed our order, one of the kids went to the restroom only to report on return that there was a dead cow in the kitchen. When I checked it out for myself, sure enough there was a black and white spotted cow lying in the kitchen with its four legs stuck straight up. That should have been our first clue to leave, but we decided to wait for our food.

While we were eating we noticed three cowboys at a nearby table. The waitress brought them their traditional complimentary basket of sopaipillas for dessert. The men ate the puffs with honey and then stuck the squeeze bottle of honey in their mouths, sucking out the last few drops. We left before we got our dessert.

Sopaipillas make great containers for both sweet and savory foods. Traditionally, they are served with honey (although traditionally it is expected that you put the honey container back on the table instead of your mouth) but they are also delicious when filled with stew or chili.

The real thing should be made with lard, but you can substitute vegetable shortening.

If you are trying to make them for the first time, you may have difficulty in getting them to puff. The two secrets are that you need to make sure the deep-frying oil is hot enough, and you can hasten the process by holding the frying sopiapilla under the surface of the frying oil for a few seconds using a spatula.

If the sopaipillas don’t puff up right away in the hot oil, they won’t puff, but you can still eat them, covered with honey, with a fork.

Lard is the fat of choice for sopaipillas

As with biscuits, the lard should be cut into the dry mix so that the texture is like cornmeal

Wrap the dough in plastic and let it rest before rolling it out.

Cut the dough into squares, rectangles, or trinangles

Showing off my new combination infra-red/instant-read probe thermometer. Use your favorite for deep fat frying.

Drop a piece of dough in the hot oil.

Immediately hold the dough under the surface of the oil with a spatula until it puffs up.

A basket of warm sopaipillas 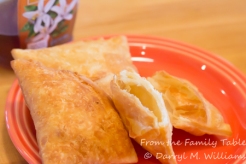 Honey at the ready.

One of the great traditions in restaurants – unfortunately tending to die out – is Family Meal. That’s when everyone takes a break from preparative work to gather together, talk about the evening ahead, and  share a meal prepared by one of the cooks. The meal is almost always comfort food made with leftover ingredients or inexpensive ingredients ordered just for the meal. The great thing is that the cooks rotate the assignment so the pressure is on to prepare something that everyone will enjoy. This is definitely not the time or place to embarrass yourself in front of your peers. Often Family Meal will feature food from childhood – a family favorite or Mom’s secret recipe. I have previously written about Sarah’s brisket and biscuits that became so popular the kitchen staff cheered when they appeared on the menu.

During a recent trip to San Francisco I got to spend the afternoon with Sarah in the prep room at Rich Table. That’s where Jonathan Tu whipped up his mother’s recipe for scallion pancakes. Nearly every Asian nation has its own version of this treat, but they all come down to a simple flour and water dough and chopped green scallions.  Kneading, layering with oil, and rolling out the dough a couple of times makes a flaky, multi-layered pancake rivaling puff pastry but without all the hassle.  There are a few little tricks or special touches in rolling out the dough, but in the end scallion pancakes are so simple and so good.

Jonathan served his pancakes with chicken sausage, rice, and a sauce of mustard, soy sauce, sesame oil, and chili flakes, but it’s up to you to choose your favorite dipping sauce or topping.

Chopped scallions and sesame oil before rolling up the coil

Rolling the scallions into the pancake.

Flattened pancake ready to be rolled and flattened again

One of the favorites on the Rich Table menu is Sarah’s country style levain. The bread is served warm with house-churned cultured butter. Sometimes the bread is scented with Douglas fir, but the most popular version is when it is flavored with wild fennel “pollen”. The pollen is actually the bright yellow tiny flowers of wild pollen that grows all over Northern California and blooms from mid to late summer. Rich Table has their own forager who brings the pollen in from fields north of San Francisco, and the restaurant has an abundance now. Unfortunately the source is regional and seasonal – that’s one of the reasons for using Douglas fir – but if you don’t happen to live in Northern California, ground fennel seeds can make a workable substitute. The smell and taste are not as delicate, and if you use too much can be overpowering, so use it carefully.

On a recent visit to San Francisco, I watched Sarah make her bread in the basement prep kitchen at Rich Table. The experience inspired me to try to adapt the recipe for the home baker. This is pretty close to the real thing, but Sarah did not share any of her baking secrets with Old Dad.

Weighing out the flour

A big supply of fennel pollen

Video of turning the dough

Preparing to form the rested dough into loaves

Oiling the pans in preparation for the unbaked loaves

Sarah’s recipe makes twelve large loves, too much for the home baker. For that reason, I have pared down the ingredients to make two generous loaves. I have made some other modifications to make it easier for the home baker. First, professional bakers weigh their ingredients, while home bakers usually measure things in cups and spoons, so I have set the quantities in the home style. Second, if you have your own sourdough starter, that is great, but if you don’t you can substitute packaged dry yeast. Third, if you have harvested your own wild fennel “pollen” (actually fennel flowers) that’s also great, but you can substitute ground fennel from your spice shelf.  Finally, you can mix the dough by hand, but that is a labor of love, so I have used a stand mixer equipped with a dough hook for the kneading and gluten-release process. Resting times are very important to make sure the gluten releases and supports good lift of the dough.

* Baker’s note: You can find the method for making your own levain or sour dough starter in an earlier post. If you choose to use yeast instead, increase the water and flour in the recipe by ½ cup each.

Finishing the mixing with the dough hook

Mixing finished and ready to rest in the bowl

Two shaped loaves resting before being put in the pans

The resting loaves covered with a clean dish towel

Dough transferred to the bread pans and ready for final rising

Nothing better than butter and fresh-baked bread