THE TRAIN FROM HELL, PART 2

What are the odds?

In 2014 I wrote about a train trip from Santa Fe to Los Angeles. Our arrival was delayed by 12 hours because of a series of events seemingly beyond the control of Amtrak and definitely beyond my control. The delay began even before the train arrived because of a tree that had fallen across the tracks somewhere in Kansas. (Do they even have trees in that part of Kansas?) Then a drunk driver ran into the engine at a crossing in Gallup, New Mexico that resulted in a delay of several hours. When we finally got going again, the train cruised along until it came to an abrupt stop somewhere around Winslow, Arizona. Amtrak was faced with an obligatory time limit on the crew so we waited in the desert until a relief crew could be brought in from someplace else. This took a couple of hours, during which time the power went out and the toilets quit working. Finally things were restored and the rest of the trip to LA was uneventful, except for passenger grousing.

Well, it happened again – at least a somewhat better version of the same story. We were on the famous train that hugs the Pacific Ocean from Los Angeles all the way to Seattle. Our destination was San Francisco where we planned to enjoy the weekend with family. The day had been enjoyable with spectacular views of the surf pounding against towering cliffs as well as pastoral scenes of mountain valleys made a brilliant green from recent rains. Just outside of Soledad, home of the infamous Soledad Prison, the train came to a sudden stop and then sat there. Finally, there was an announcement that the engine had encountered “debris” on the track, and that the trip would resume after damage had been assessed. My guess was that the “debris” may have been an escaped prisoner. I turned out to be wrong, but only barely. After more long minutes of silence, the conductor  announced that the train had struck a trespasser who had been walking on the track. He had experienced only an injury to his arm and had been transported to the hospital. (How amazing is that?) The story rapidly became embellished amongst the passengers to include details that the victim had been walking his children along the track (??!!) but they were not injured.

There was another delay because as a routine, the engineer had to be replaced after the accident to recover and to investigate the accident. The replacement had to come from a long distance. Finally the wait was over, and the train resumed its journey only to stop again in Salinas. The crew had used up its allowed time, and so a crew change was required. (Sound familiar?) Again, the replacements had to come from some distance. After an hour or so, the train started up again only to stop a short way down the track to put on another car. While we waited, the power went out and lights went out, too. I’m not sure about the toilets, but the outage did not last long and we were once again on our way. Finally, after 2 AM, our train pulled into the station in Oakland where we caught a bus over the Bay Bridge, then to an Über, and finally to our daughter’s house at a little past 3 AM.

Susan had been heard to say on more than one occasion during the trip, “Train travel is so relaxing.”

At least in my neighborhood, it has become increasingly difficult to find a whole chicken at the grocery store. Nowadays, there are shelves and shelves of chicken parts – breasts, wings, thighs, and drumsticks – with increasingly processed sub-types – chicken tenders, boneless breasts, “drumettes”, skinless thighs, and ground chicken. You get the idea. When Ralph’s announced a sale of whole chickens, my menu-driven mind went into overdrive. Usually I boil a whole chicken for the resultant stock along with enough meat picked from the bones for gumbo or green chile chicken or something similar. This time I wanted to do something else that was also not too hard or tome-consuming. I flashed on roasted chicken, inspired by Jacques Pépin who wrote in his classic La Technique, “There is nothing as simple and as delicious as a well-cooked roast chicken.” He went on to say, “Unfortunately, to get it properly done in a restaurant is as rare as it is simple.” That sounds like an intimidating challenge from one of the most important cooking experts of our time.

Sarah knows about intimidation by Jacques Pépin and André Soltner, both very warm and generous individuals. They were deans at the French Culinary Institute in New York City when she was a student. Chefs Pépin and Soltner  provided instruction in their lectures and demonstrations along with kindness and encouragement in their personal interactions, but they were also involved in examinations. Roasting a chicken was one of the tasks in the final exam. Sarah was anxious, but she passed – with great relief and celebration.

This recipe is drawn freely from Pépin’s La Technique. If you can find a copy, you should by all means buy it. Published in 1976, it is out of print, but you can find it on-line. The book is a heavily-illustrated step-by-step narrative of French cooking techniques, and the photos are all of Pépin himself performing the actions required in each technique. On top of that, La Technique is an excellent cookbook in its own right. It goes without saying that my roast chicken is not in the league of Jacques Pépin’s, but hopefully it would pass the test.

Last night was Oscars Night and we headed to Carol’s house to watch the festivities and to compete in the family predicting-the-winners sweepstakes. This is a long tradition at Carol’s, and we have been invited each year since our move to California. Carol had planned to have steak and cold boiled shrimp for what was our usual Sunday family dinner, but she has been under the weather lately. I suggested that I make some odds and ends of thing so that she could stay off her feet. She insisted on the steak and shrimp – which was alright by me – but I went ahead and made some snacks that we could enjoy in front of the television. I tried to make the food simple so that nobody had to do too much cooking. This dip is simple. It takes about 30 minutes to assemble and with store-bought tortilla chips makes an attractive party platter.

The seven layer taco dip turned out to be a big hit. The first time that I ever enjoyed it was over fifty years ago at a family gathering. Susan’s sister, who was famous in the family for no-fuss party foods brought a huge platter that was devoured in short order. Like so many classics of fifty years ago, taco dip has faded into obscurity. I’m not sure why because it is tasty, a crowd pleaser, and easy to make. It was popular last night. As an aside, I was nowhere close to winning the sweepstakes. Just like last year, the teen-age film buff walked away with the prize, although she was tied by her dad, who is also a movie fan. Susan, who is oblivious to movie stars, always gives the two champs a run for their money. How does that happen? 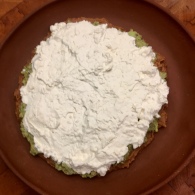