Family Sunday dinner was off this week because Carol, her husband, and their daughter had an important school event. Susan and I spent the evening with our grandson, so I decided to fix one of his favorite meals, shrimp and grits. That Southern classic clearly needed a traditional Southern dessert to go with it. I thought about banana pudding ringed with vanilla wafers. What Southern cafeteria or Southern school lunchroom doesn’t have their own version? That led me to cream pie – in particular, banana cream pie – and as I was free-associating, bananas Foster. I know that shrimp and grits is very much part of the Low Country of South Carolina and Crook’s Corner in Chapel Hill, North Carolina while bananas Foster is quintessential New Orleans and Brennan’s. Cream pie is more or less middle ground and definitely Southern, but traditional banana cream pie dressed up a bit with the flavors of bananas Foster might be tasty. This is my spin.

The topping is Swiss meringue, but you could top it with whipped cream. You could even set it ablaze with some added heated brandy like a baked Alaska. Then you would wind up with an even more authentic bananas Foster.

This is not the real thing, so Brazilians who might be reading this should not comment that it is missing an ingredient that made their mother’s version the best that ever was or that the recipe has an ingredient that makes the dish NOT feijoada.  Traditional recipes often call for unpeeled pork tongue, snouts, ears, and tail. This recipe has none of those.  The two essentials are black beans and meat. This recipe has both. If you serve this dish, you should be aware that the only thing you will want to do after the meal is to take a nap. Be warned. Feijoada is usually described as the national dish of Brazil. The first time I ever had it was over 40 years ago. One of several international colleagues served it at his home as part of sharing among us at the end of long work weeks. Over time we enjoyed cuisine from Brazil, Argentina, Japan, Greece, Australia, Turkey, India, and Pakistan – and of course, the United States –  so it was an excellent culinary world tour.

I have been thinking of making feijoada for our Sunday family meal for some time, but it seemed like a lot of effort. Now, the inspiration is the coming together of a number of things. First, Sarah has engaged a lovely young woman from Brazil to help with the children so that Sarah can focus more on the restaurants and on a cookbook that will be published soon. Second, Bia, the young woman, brought a gift with her, The Brazilian Kitchen by Leticia Moreinos Schwarz (Kyle Books). Finally, I was up for cooking Sunday dinner.

The cookbook is so beautiful that I bought my own copy. The author is from Brazil but an American culinary school graduate and professional chef. Her recipes are simplified and often modernized versions of traditional dishes. Instructions are clear, and the images are mouth-watering. Like me, you may have a hard time finding Brazilian ingredients in your local grocery store. Of course, these days you can order them online. The most basic and hardest-to-find ingredients are sweet and sour manioc starch and manioc flour. To add to the confusion, in the USA sweet manioc starch is often called tapioca flour. You can substitute one for another, but then – as I found out – the results won’t be the same.

To go with the feijoada I made hearts of palm salad and pão de queijo, a delicious Brazilian cheese bread that we first enjoyed in an eclectic restaurant in Redondo Beach. This is where I ran into trouble. Schwarz’s recipe for the bread called for both sweet and sour manioc starch. All I could find at the store was tapioca flour. The resulting batter was so sticky it stuck to everything and was impossible to shape into balls, but after some extended time in the refrigerator before baking, the results were still excellent.

Here’s the recipe for my version of feijoada. Many recipes call for carne seca, akin to jerky but not so tough. As a substitute, I used fresh beef seasoned with dry meat rub and dried in a warm oven for several hours. I also used the slightly spicy Portuguese sausage, linguiça. As an aside, many beans contain phytohemaglutinin which can cause nausea, vomiting, and even blood problems. The toxin is inactivated by cooking at boiling temperatures. Red kidney beans are said to have the highest content, cannellini beans next, and others down the line. Black beans have lower levels.  It has been reported that very slow, low-temperature cooking, like sous vide or a slow cooker set on low, fails to raise temperatures sufficiently to inactivate the toxin, so if you are concerned, you should cook the beans in a pot at a good boil. In any event, be prepared for a hearty meal and the need for a long nap. 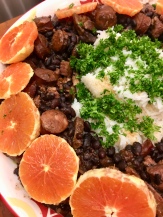 In a small saucepan over medium-low heat, melt 2 tablespoons unsalted butter. Stir in 1 cup of tapioca flour. Stirring frequently to avoid burning, cook the mixture until the flour turns a golden brown. Remove from the heat. Serve with a spoon so that it can be sprinkled over the feijoada.

EIGHTY HAS ITS PERKS

After the train ride from hell, we joined all of our family in San Francisco. It was several days of celebration: a couple of kids’ birthdays, one family had their Seder while others dyed Easter eggs. Little did I know of the celebration of celebrations. I was instructed to be sure to wear the sport coat that Susan had insisted on packing. All of the family showed up, the children prepared for a day of play and the adults dressed up – unusual for a family gathering. The mystery deepened when a long white limousine pulled up in front of the house. The kids were left behind with the oldest teenager and a sitter in charge. The adults piled into the limo and headed through the Presidio to the Golden Gate Bridge. I was told we were celebrating my upcoming birthday, but nothing more. The conversation turned to family activities and reminiscences as we maneuvered the weekend traffic in Marin and San Rafael out onto the green expanses of the Delta farms and marshes. It became evident that we were heading to Napa when the flatlands gave way to rolling hills and rows of close-trimmed grapevines. 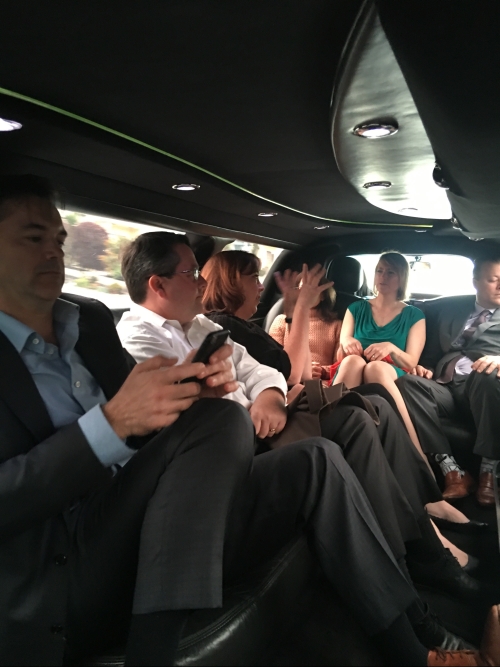 Finally, we pulled up to a gray stone building that was immediately recognizable as The French Laundry, the legendary restaurant that all of the family knew had been on my must-do list for many years. This was their surprise to commemorate my eightieth birthday.

We were greeted by a young man who had known Sarah and Evan since their days in New York where he had worked at Per Se. He and a young woman dressed in black led us on a brief tour of the gleaming kitchen filled with at least two dozen cooks in whites, each stationed at a specialized work space creating one or another beautiful dish. The woman in black then led us through the chilly wine cellar of 13,000 bottles into an elegant room that would be our home for the next four hours of eating. She pushed back a glass door and next a louvered screen to open the room to the outdoors and a beautiful garden scene. Then the performance began. The first act was a ritual sabrage performed by a tall man dressed in formal attire and carrying a shiny sword. With one whack of the sword, he lopped off the cork and bottle neck, losing nary a drop of champagne that he then poured into our waiting flutes after stabbing the sword into the lawn in front of us. 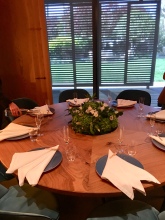 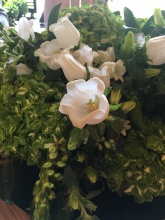 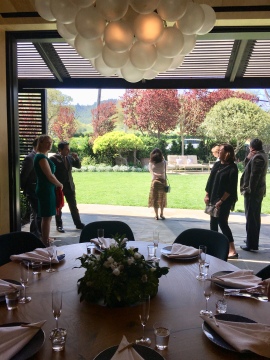 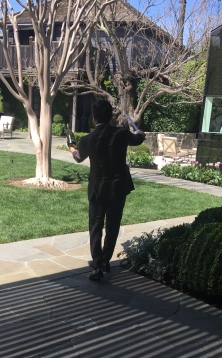 Then the food began.

The meal was filled with French Laundry classics. First were coronets: black-sesame-studded tuiles shaped into cones filled with crème fraiche and salmon tartare. Whimsical, beautiful, and tasty at the same time. Each coronet came in a little silver stand that was centered on the huge blue Limoges service plate. They outshone the accompanying “Ritz crackers”, tiny little cheesy biscuits, in visual drama but not necessarily in flavor. Both offerings were delicious.

Next came a small white bowl that nestled two perfect white asparagus tips and a dark disc of Perigord black truffle, Holland White Asparagus “Vichyssoise”. It was a little sad to see the composition disappear beneath a small lake of creamy soup, but the flavor made up for the visual loss.

Then came what is arguably the restaurant’s most famous dish: “Oysters and Pearls.” 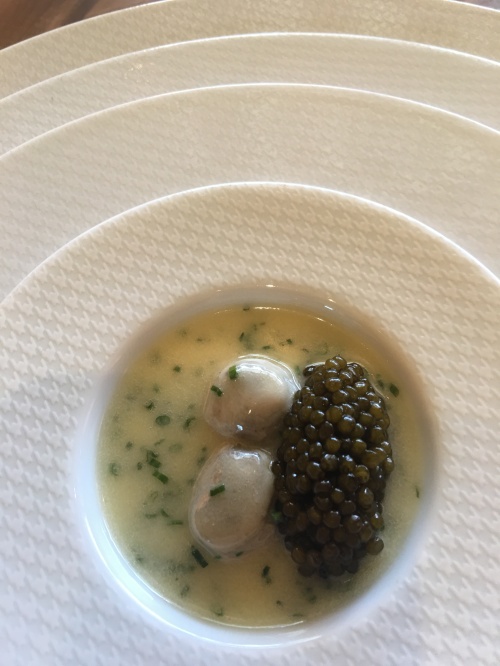 Hen Egg Custard with ragout of Perigord truffles served in an egg shell with a laser-sharp rim and topped by a chive imprisoned between two impossibly thin, matched potato wafers 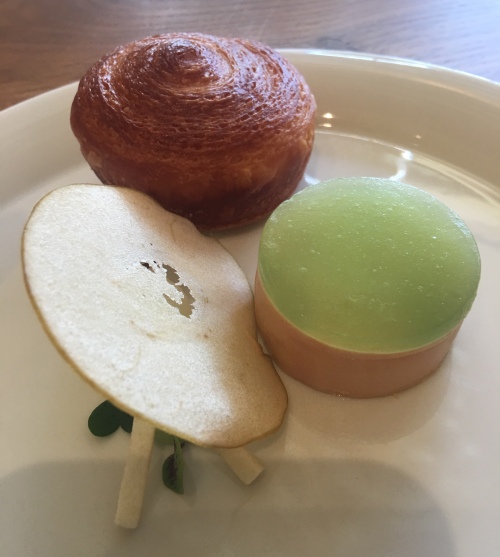 “Bread and Butter” was a perfectly formed  rosette “Parker House Roll” with a center of roasted paprika and served with a  quenelle of Diane St Clair’s Animal Farm butter. 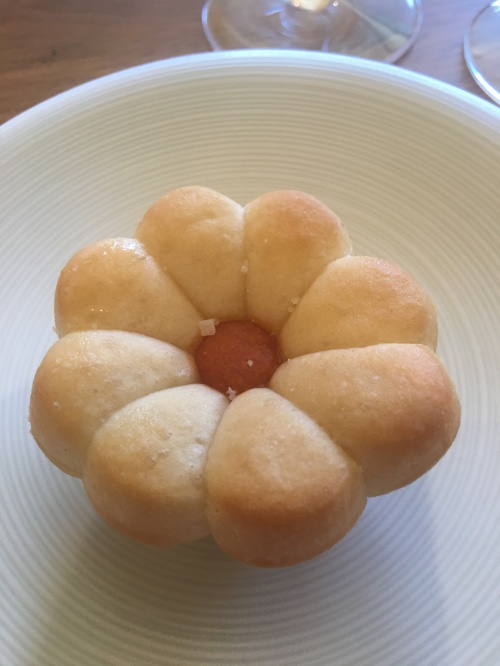 “Mignardises” – handcrafted chocolates and truffles of many flavors and beautiful coatings

To be sure, it was a most amazing meal. But the best part was to be surrounded by family and to share remembrances and stories that had already been retold many times and to laugh with one another. It was a wonderful way to mark eighty years of being on this earth, and this post is one way for me to thank all of my children and their loving spouses.