It’s Carol’s turn with our Sunday family dinner. As a nod to Mardi Gras this next week, she plans to make jambalaya. I am looking forward to that. Since Carol is cooking, that means that I am up for dessert. There are lots of Louisiana desserts that would go with jambalaya, but King Cake seemed to be the most appropriate. King cake is a tradition in many parts of the world, but in Louisiana it is served across the state, starting on Epiphany (January 6th) and ending on Mardi Gras (this year, February 13). There are many versions of king cake. Some folks make rings of filled cream puffs; others make baked meringues, etc., etc. The most common version is a brioche-like sweet bread, often filled with raisins or other dried fruit. The cake is topped with icing and sprinkled sugars in the traditional Mardi Gras colors of green, yellow, and purple.  I couldn’t find purple-colored sugar sprinkles, so I made do with red. I hope no one will notice. You can go all-out and fashion a “crown” of a circle of candied or maraschino cherries. The best part of the tradition, though, is finding the baby. A small plastic baby is hidden in the cake before it is baked. In the absence of the baby, a black bean will do. The person who gets the slice of cake with the baby (or bean) is supposed to have good luck. A less recognized part of the tradition is that the person is also supposed to bring the next king cake for the next celebration.

Interestingly, none of our many cookbooks from Louisiana contain a recipe for king cake. The recipe I have used is from King Arthur Flour. Laissez les bon temps rouler.

Pinch the dough closed over the filling 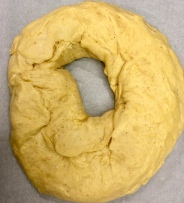 Shaped into a ring (sort of) 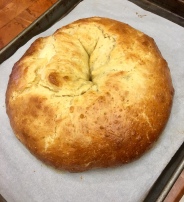 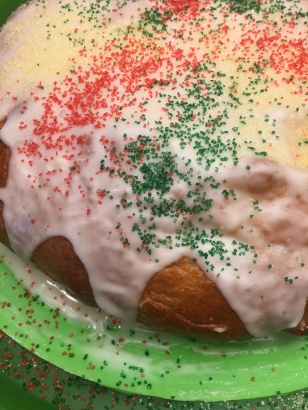 Kevin has developed a strong interest in Manhattan cocktails. He has read many recipes and tried many. He has looked into the qualities of various bourbons and rye whiskeys. The one thing he has settled on is the maraschino cherry that is an obligate part of any authentic Manhattan. He quickly dismissed the fluorescent red cherries that were available in my refrigerator and adopted the burgundy-colored cherries that are favored in most of the restaurants and bars in town. I will admit that they are delicious. They are also expensive. A small jar at the local Whole Foods competitor is $24. The cheaper fluorescent variety is not available at that store; at a more traditional grocery store a much larger bottle of the old standby is around $6.

The story of the two maraschino cherries is very interesting. Going back to the eighteenth century, Croatia on the Dalmatian Coast preserved its small, sour marasca cherries in alcohol for later consumption. Eventually that led to the development of a liqueur called maraschino which enjoyed wild popularity around the world. In the United States, Prohibition was established so that both the liqueur and the cherries preserved in the liqueur were banned. Meanwhile, an enthusiastic chemist in Ohio set out to develop a method to preserve cherries. No alcohol was involved, but a lengthy chemical process that involved bleaching of the cherries, multiple preservatives, and FD&C red dyes (now FD&C  red dye 40) produced the familiar bright red cherry that as a child I loved on top of banana splits and in punch bowls. (I made myself sick as a ten-year-old, fishing out the maraschino cherries from the punch at my uncle’s wedding)

Until recently, we had no choice but the bright red synthetic maraschino cherry, but the real thing has made a comeback. The limitation in the resurgence is, of course, the cost. Being the tightwad that I am, I was unwilling to spend $24 for a little jar of real  maraschino cherries. I decided that I would make my own rather than shelling out the money to Luxardo, which has become the (almost) monopoly of maraschino cherries and maraschino liqueur. So far my investment has included $30 for a bottle of Maraska maraschino liqueur from Zadar, Croatia (the original site of the whole maraschino industry), $8 for a pound and a half of Bing cherries (marascas are not readily available unless you visit Croatia), several dollars for sugar, cinnamon sticks, spices, etc., and my free labor. It is clear that I have made a strong statement about the economies of DIY over the high prices of the authentic stuff.

The good news is that making your own maraschino cherries is easy. The bad news is that they don’t taste the same as the real thing. The really good news is that they still taste mighty good, and you have well over a half bottle of liqueur left to enjoy on its own. You definitely need a cherry pitter, but a small one works just fine. The only thing else that is required is a little patience. 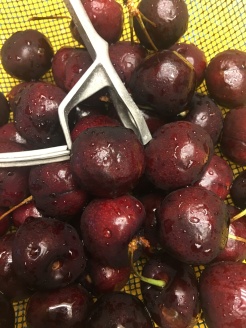 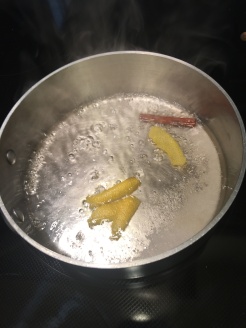 Boiling sugar, water, and flavorings before adding the cherries