Turns out there is another version of chicken and waffles. It traces its origins to the Pennsylvania Dutch area around Lancaster, Pennsylvania. The dish is essentially the filling for chicken pot pie served on top of a waffle. To me, that is an interesting concept, and one that sounds like it might be delicious. My mother’s family traces its origins from Pennsylvania Dutch country through Wisconsin, Iowa, and eventually South Dakota. My wife’s family hails from Wilmington, Delaware, just a short drive to Lancaster. I don’t remember chicken and waffles ever showing up on either family table.

That made me think that maybe a Southwestern version of chicken and waffles incorporating some regional ingredients would make a good alternative to either of the better known traditions. Blue cornmeal waffles seemed like a good starting place. Green chiles and piñon nuts would serve as tasty additions. To brighten up an otherwise monochromatic dish, I topped it all with pico de gallo. For that, you probably have your own recipe. If you don’t, I’ve added one without the kick (There is a serious medical reaction to capsaicin in our household) but you are encouraged to zip it up to your own tastes.  So here it is: Santa Fe Style Chicken and Waffles with blue cornmeal waffles and green chile chicken sauce. If you can’t find blue cornmeal at your local store, you can order some from Talon de Gato farms. Otherwise, substituting yellow or white cornmeal is perfectly acceptable.

Batter in the waffle iron 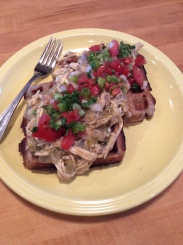 Place two waffles on each plate. Top with about 1½ cups of the green chile chicken sauce. Garnish with pico de gallo. Serve immediately with more optional Cholula sauce, if desired.