It’s been six weeks since our stove and oven quit working. The saga of the long delay will have to wait for another blog – when and if the stove gets repaired. This time I will deal with how someone who likes to cook copes without a stove.

Six weeks is a long time to go without cooking for some households, at least ours.  During this time, we have eaten some delicious meals at Carol’s house, and for that we thank her. We have eaten at some little neighborhood restaurants across the street. But we have also depended upon our supply of plug-in appliances, along with a slow cooker that we borrowed from Carol. Waffles with the waffle iron, panini from the George Forman grill, and rice from the rice cooker have all been on the menu. The main thing I have done, though, is to use the slow cooker. It works beautifully and confirms all of the enthusiasm for its utility for busy people. You toss some things in the pot, turn it on, leave it unattended for a few hours, and return to a delicious dish just waiting to be served. The only problem, in my hands at least, is that everything comes out looking and tasting like stew. I know that there are myriad cookbooks filled with interesting recipes. I know that there are even some enthusiasts who claim you can bake a cake! I have not succumbed.

The one appliance I haven’t used since the demise of household fire is our Sunbeam rotisserie. I have written about it in the past; it really does do a good job of roasting things as if they were on a spit. It’s my turn for Sunday family dinner, so I thought it would be a good time to get out the rotisserie. It also seemed like the opportune time to try out Sarah and Evan’s recipe for roasted chicken that appeared in this month’s issue of Food and Wine. (Check out “Winner, Winner” on page 46 of the October, 2017 issue.) Since Douglas fir trees don’t grow at this altitude in Southern California, I substituted rosemary. Also, since the original recipe was for oven roasting, I have made a few changes to accommodate the absence of the stove and the demands of the rotisserie. Otherwise, everything is the same. The chicken is brined over night in a bath of buttermilk, salt, sugar, garlic and rosemary with the secret ingredient of porcini mushroom powder. The mushroom powder adds distinct umami to the mixture. The final touch of roasted garlic oil is also an important taste profile. Without a stove, I had to use the microwave to heat the garlic slices in olive oil.  Surprisingly, the garlic browned, although I am sure it could easily burn and become bitter. In any event, the process worked well, and the family had a pleasant Sunday dinner.

I will be glad when we get our stove back. 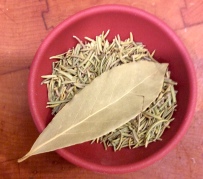 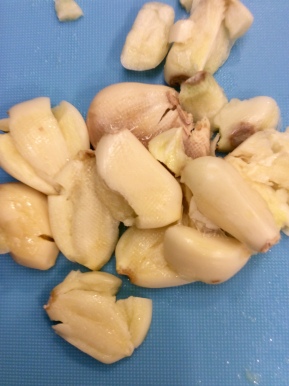 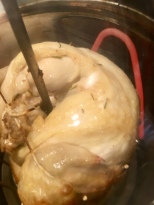 ROAST PORK AND A HAPPY BIRTHDAY

I celebrated my 77th birthday the other day. For some reason it seemed momentous even though it wasn’t one of those that we all remember – 21st, 30th, 40th, and 65th. I guess by this time, I’m just glad to be celebrating yet another. Susan came up with some nice gifts: cooking classes the next time we get to the Bay Area and pickles from our local Barrio Brinery (I wonder if she was trying to tell me something about my disposition?) All of the children gave me a telephone call, so it was a complete and special day.

But after a big breakfast at one of our favorite French bistros, Clafoutis, an outing in town, and shopping for the fixings, including duck fat,  for a birthday dinner, we didn’t feel like eating.

We – I – finally got around to cooking the other night and had a great menu of roasted pork tenderloin, oven-roasted potatoes, asparagus, and Hollandaise sauce. It was all fairly easy, and it wound up being tasty. 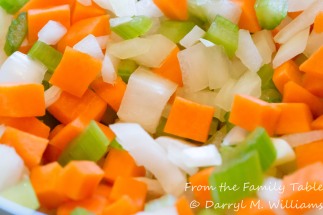 It is getting harder and harder to find a traditional bone-in pork roast or a boneless pork roast. Most commonly one finds pre-packaged pork tenderloins. They have several advantages: they cook quickly and they are very tender. The main disadvantage is that they have little or no fat, so if you want to make pork gravy, you have to add some extra fat. I chose to use duck fat, which you can often buy frozen in a little bucket at a well supplied butcher shop, but you can use your favorite.

You can use any oil or fat that you prefer to roast the potatoes. A flavorless cooking oil with high smoke point, like canola would work , as would clarified butter. But duck fat gives a very nice flavor.

Probably everyone has a recipe for fool-proof, quick Hollandaise made in a blender. There are a couple of pointers that get left out of most recipes. First, the butter is very important. It should be unsalted rather than salted, and you should take your time in clarifying it. Most recipes just tell you to melt the butter and skim off the foam and pour off the liquid at the bottom. Remember that the foam is actually milk solids and the liquid at the bottom is water (fat is lighter than water, so water and stuff dissolved in the water sink to the bottom). If you heat the melted butter over a very low heat for an hour or so, the foamy milk solids will become firmer and more granular so that it is easy to skim them off, in contrast to the foam that has not yet become denatured.. Second, the sauce will be thicker if you make the emulsion with egg yolks and clarified butter and then add the lemon juice, rather than adding the lemon juice at the beginning.

San Francisco’s Ferry Building Farmers Market is much more than the outdoor stalls which attract crowds a couple of days each week. There are all sorts of shops inside the building selling everything from kitchen gear to local caviar. The cheese shops are outstanding, the bakeries are great, and the mushroom place has a huge choice of the freshest specimens. For the carnivores, there are several great shops, but a favorite of both Sarah and me is Prather Ranch. We bought four succulent lamb shanks already done up in plastic, but clearly very fresh. These would be the centerpiece of our farmers market meal.

After getting the lamb shanks home, Sarah browned them in a huge Magnalite casserole along with a couple of cloves of smashed garlic and some aromatic vegetables: carrots and onions. Chefs seem divided over the use of celery in the classic mirepoix combination of onions, celery, and carrots. Some refuse to use celery as they think it is too bitter. Whatever your own personal bias might be, be sure to brown the lamb shanks in some oil and your choice of vegetables. Add some stock or water and a good slug of red wine. Season with salt and pepper. Toss in a generous handful of fresh thyme and Mediterranean (not Mexican) oregano. Bring to a boil, and then cover and reduce the heat to the lowest simmer.

Some purists insist on using rosemary and garlic as the classic seasoning for lamb. You can do that instead if you prefer, but I can guarantee that thyme and oregano work beautifully. 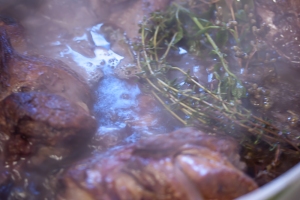 Sarah finished her dish over low heat on the stove top, turning and basting frequently as well as skimming off excess fat. If you prefer, you can braise the lamb shanks, covered,  in the oven at low heat – no more than 250°F. Be sure to check the pot frequently and skim the rendered fat. Plan to braise the shanks for at least 2 to 3 hours or until the meat is well done, tender, and falling off the bone.

When they are done to your liking, remove the lamb shanks to a platter and serve them immediately while still warm.

Lamb shanks vary greatly in size, but in most cases you should allow one for each diner. With only three of us and four lamb shanks we wound up with leftovers. 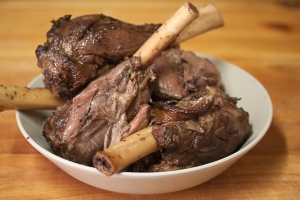