I had meant to post something on Saint Patrick’s Day – for certain NOT corned beef and cabbage, but maybe something about Irish soda bread. But we were traveling back from San Francisco, and then my friend and fellow blogger, Jim Hastings, the Gringo Gourmet, wrote about his mother’s recipe for soda bread.  I still haven’t given up on a southwestern version of soda bread, but I’ve been so busy since we got home that I haven’t had time to cook, and anyway I am once again on a diet. Susan assures me that the reason I can’t lose any weight is that I wind up eating whatever it is that I’ve cooked for my blog postings.

So, needing something to write about, I thought of our trip the other day to Alcatraz. I couldn’t think of any prison food to go with the text, especially anything that would interest folks who like to read about food. That’s the reason that this is just a travelogue.

If you have never been to Alcatraz during a visit to San Francisco, it is something that you should do. Be advised that same-day tickets are usually impossible to get, so you should make reservations ahead. The ferry leaves Pier 33 about every half hour during the day, and  takes about 15 minutes. You should plan at least 2 hours on “the Rock” before you catch the return boat. You may also be able to plan your trip around a meal at the nearby Fog City Diner. 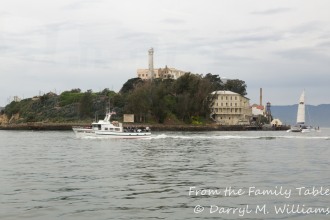 View of the Bay Bridge and the San Francisco skyline

A special feature right now  through part of April is an exhibit of the work of Ai Wei Wei, the dissident Chinese artist who has spent much of his life in a Chinese prisons. It seems appropriate that Alcatraz is the site of the exhibit.

A centerpiece of the exhibition is a massive Chinese dragon that stretches surely over a hundred feet in one of the main exhibit halls – part of the old Laundry Building. Another of the key displays includes portraits of political prisoners from throughout the world. The portraits are arranged across the floor reminiscent of the AIDS quilt. The most amazing thing about the portraits is that they are all made of Legos carefully pieced together but with remarkable detail. 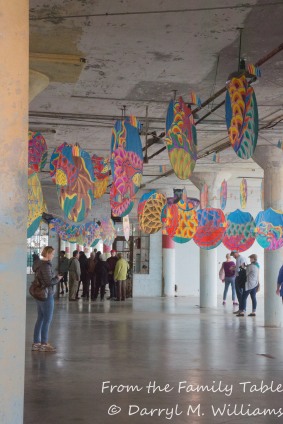 Detail from the dragon.

Alcatraz is pretty much a ruin. It was a military prison for many decades before it became the federal high-security prison. Then it was abandoned on  March 21, 1963. 1963. It was briefly occupied in 1964 by a small group of Sioux Indians. Then, from 1969 to 1971 it was occupied by a group known as Indians of All Tribes. Subsequently it has just sat, crumbling into ruins. Now the place is part of the Golden Gate National Recreation Area, and many of the buildings are being restored. Still, the ruins are very interesting and also very photogenic. One could easily spend many hours with a camera.

Ruins of the Officers’ Club

View of one of the buildings in the Powerhouse complex

Another view of the abandoned powerhouse and the chimney

At the very top of the hill sits the main cell block. The cells remain intact, and there are a few furnished to show the not-so-luxurious accommodations.  One stop on the tour is the dining hall along with the accompanying kitchen. The breakfast menu for the closing day is still posted on the wall. It includes choice of cereal, juice, coffee, fruit, eggs, and breakfast meat. Sounds ok, but my guess is that it was slung out of the kitchen where outlines of the terrifying knives used by the cooks still cover the walls.

Cell in the Main Cellhouse

San Francisco – so close and yet so far.

It is not for nothing that Alcatraz is nicknamed “the Rock”. That’s all that it was until soil was brought in to  make it a more pleasant place to live for the families of the guards and other prison employees. Now there are lots of flowers around the grounds, but they are all invasive species, and there are no native plants. 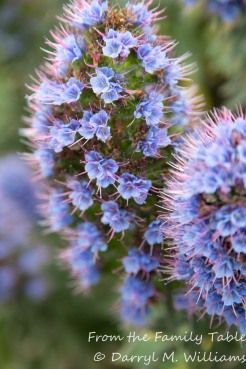 One of the many beautiful flowering plants, all of them invasive

Susan and I just returned from another trip to San Francisco. We babysat our 10 months-  and 3 years-old grandsons while Sarah and Evan travelled to Dallas. They were invited to cook with the staff at a hot, new Dallas restaurant, FT33. Sarah and Evan and the local chef alternated dishes for an 8-course tasting menu with wine pairings. The place was sold out, and Sarah got to see Corey and Megan, school friends of our other daughter, along with a fellow member of her crew team at the University of Texas.

My cooking task was more challenging: I was charged with feeding the two little ones. Actually, the 10-month-old was not difficult. He is still drinking a lot of liquids, and he will eat anything else you put in front of him.

The three-year-old was another story. The first morning, he wouldn’t eat his cheerios until I added some milk, so the next morning I anticipated him and poured in the milk. That morning he decided he didn’t want milk, so I had to scrap the first bowl. The next morning I made French toast with maple syrup. He didn’t like it, but the 10-month-old polished it off.

My greatest failure turned out to be lunch. I put together some things for his lunch box for nursery school. My first thought was a peanut butter and jelly sandwich. What child doesn’t like PB&J? Besides, PB&J is not forbidden at his nursery school as it is in many places. As I was planning my menu, Sarah sent a text message that the toddler doesn’t like peanut butter. I made a quick change of plans and substituted some chèvre that I found in the fridge. Then, I reached for a jar of fig jam when he announced that he didn’t like jelly. For that, I substituted some hummus. I thought a goat cheese and hummus sandwich on whole wheat bread looked pretty tasty, so I packed it with freeze-dried strawberry slices, crispy apple chips, and a stick of string cheese. Imagine my disappointment when the lunch box came home at the end of the day with only the string cheese gone.

We took advantage of the kids being at nursery school by taking a little trip to the Embarcadero and enjoying a good lunch at the well-known Fog City Diner.

The iconic TransAmerica Tower and the classic Fog City Diner 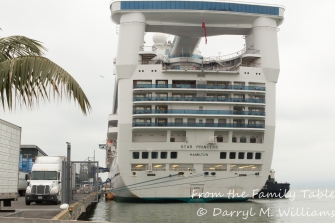 Pigeons in front of the Exploratorium 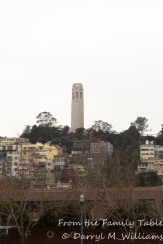 I was more successful with dinner one night. I found some packaged gnocchi and a cooked chicken breast in the refrigerator along with some mushrooms and colorful “snacking peppers”. I put it all together with some brown butter sauce, and it turned out to be a huge favorite with both kids. 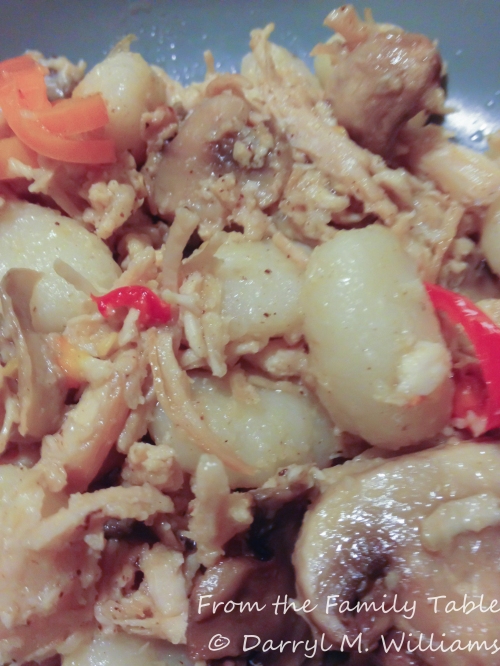