This is not the real thing, so Brazilians who might be reading this should not comment that it is missing an ingredient that made their mother’s version the best that ever was or that the recipe has an ingredient that makes the dish NOT feijoada.  Traditional recipes often call for unpeeled pork tongue, snouts, ears, and tail. This recipe has none of those.  The two essentials are black beans and meat. This recipe has both. If you serve this dish, you should be aware that the only thing you will want to do after the meal is to take a nap. Be warned. Feijoada is usually described as the national dish of Brazil. The first time I ever had it was over 40 years ago. One of several international colleagues served it at his home as part of sharing among us at the end of long work weeks. Over time we enjoyed cuisine from Brazil, Argentina, Japan, Greece, Australia, Turkey, India, and Pakistan – and of course, the United States –  so it was an excellent culinary world tour.

I have been thinking of making feijoada for our Sunday family meal for some time, but it seemed like a lot of effort. Now, the inspiration is the coming together of a number of things. First, Sarah has engaged a lovely young woman from Brazil to help with the children so that Sarah can focus more on the restaurants and on a cookbook that will be published soon. Second, Bia, the young woman, brought a gift with her, The Brazilian Kitchen by Leticia Moreinos Schwarz (Kyle Books). Finally, I was up for cooking Sunday dinner.

The cookbook is so beautiful that I bought my own copy. The author is from Brazil but an American culinary school graduate and professional chef. Her recipes are simplified and often modernized versions of traditional dishes. Instructions are clear, and the images are mouth-watering. Like me, you may have a hard time finding Brazilian ingredients in your local grocery store. Of course, these days you can order them online. The most basic and hardest-to-find ingredients are sweet and sour manioc starch and manioc flour. To add to the confusion, in the USA sweet manioc starch is often called tapioca flour. You can substitute one for another, but then – as I found out – the results won’t be the same.

To go with the feijoada I made hearts of palm salad and pão de queijo, a delicious Brazilian cheese bread that we first enjoyed in an eclectic restaurant in Redondo Beach. This is where I ran into trouble. Schwarz’s recipe for the bread called for both sweet and sour manioc starch. All I could find at the store was tapioca flour. The resulting batter was so sticky it stuck to everything and was impossible to shape into balls, but after some extended time in the refrigerator before baking, the results were still excellent.

Here’s the recipe for my version of feijoada. Many recipes call for carne seca, akin to jerky but not so tough. As a substitute, I used fresh beef seasoned with dry meat rub and dried in a warm oven for several hours. I also used the slightly spicy Portuguese sausage, linguiça. As an aside, many beans contain phytohemaglutinin which can cause nausea, vomiting, and even blood problems. The toxin is inactivated by cooking at boiling temperatures. Red kidney beans are said to have the highest content, cannellini beans next, and others down the line. Black beans have lower levels.  It has been reported that very slow, low-temperature cooking, like sous vide or a slow cooker set on low, fails to raise temperatures sufficiently to inactivate the toxin, so if you are concerned, you should cook the beans in a pot at a good boil. In any event, be prepared for a hearty meal and the need for a long nap. 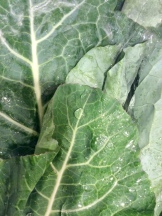 In a small saucepan over medium-low heat, melt 2 tablespoons unsalted butter. Stir in 1 cup of tapioca flour. Stirring frequently to avoid burning, cook the mixture until the flour turns a golden brown. Remove from the heat. Serve with a spoon so that it can be sprinkled over the feijoada.

A few weeks ago I had what I thought was a wonderful opportunity. I was invited to show some of my photographs in a nearby artists’ cooperative gallery. I put together about  half a dozen of my favorite images, framed, and matted them. Along with oils, watercolors, pottery, and jewelry from other artists, the photos were arranged for a show.

As is the local tradition, the new show was inaugurated with a Friday evening opening complete with sparking water, wine, and appetizers. Each artist was asked to bring some kind of food, so that set off a perpetual struggle in my mind – what to serve? I found a recipe for chorizo tapas that sounded delicious, but I worried that gallery visitors might get grease on one of the oil paintings. Then I thought of empanadas filled with hearts of palm. I had first tasted them forty years ago at a party held by one of our Brazilian friends.

The bonus that moved me toward this option  was that I had a can of hearts of palm in the pantry. At the same time, making the dough for empanadas seemed like more effort than I wanted so I decided to use frozen puff pastry. The end result turned out to be these heart of palm puffs.

Heart of palm, also called palm heart or palmito, can be harvested from the growing tips of nearly all palms, but  this may destroy the palm. The commercial variety comes from the peach palm, a plant from the Amazon that now is grown throughout Central and South America. It is sustainable without destroying the palm for future growth.  Supposedly you can find fresh palm hearts in gourmet grocery stores, but I have only seen the canned variety.

Canned hearts of palm from Ecuador

Coins of heart of palm with Old Bay marinade

A basketful of baked heart of palm puffs

The gallery opening was crowded, and the puffs disappeared. So did the gallery. What the reader needs to know is that nearly every person who lives in Santa Fe considers himself/herself to be an artist. The other factor is that there may be more galleries than residents. That is a certain formula to assure that many galleries disappear quickly amidst the competition. That was the fate of our co-operative, and my first show did not survive for this post.