After months of planning, construction delays, major renovations, and recipe testing, RT Rotisserie opened during the Memorial Day weekend. The first day was a big success: A good-sized group was lined up before the doors opened, and the line at the order counter continued unabated through the lunch hour. There were the to-be-expected opening day hiccups. Staffing could have been different. Some of the dishes needed adjustments. Menu changes were already under discussion. And, of course, there was the inevitable and predictable plumbing emergency. In spite of all of that, the opening went smoothly, and Sarah and Evan returned home well after midnight, satisfied with the day. 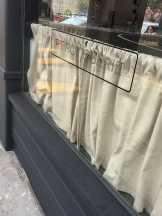 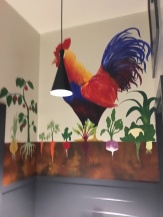 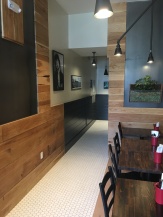 We had travelled from Los Angeles to take care of the boys during opening week. That’s a challenge for a couple of old folks, but we managed to keep the little ones entertained. They only asked, “Where’s Mommy?”, a few times. Still, we did get a chance to try out the food at the restaurant. Our son and his family came up from Silicon Valley. They had originally planned to go on a canoeing and camping trip in the Sierras, but the road to their favorite lake had been damaged during the winter’s heavy storms. Instead, they joined us in a trip to RT Rotisserie after the lunchtime rush. Still, I think there was a little shock when eight of us appeared in line in a smallish space that seats 49. Later we learned that other large family groups had come in earlier in the day.

We enjoyed several things from the menu. First was the centerpiece of the offerings, rotisserie chicken. Preparation includes an overnight brining in house-made buttermilk fortified with brine and several herbs and spices. Then the brined chicken is air-dried in a large refrigerated walk-in for a day so that the skin will roast to a tasty crispness. Huge slabs of pork belly undergo similar treatments before they are filled with a tasty stuffing and then placed on the spit. Most surprisingly whole heads of cauliflower are given a similar preparation before they are roasted. When they came to the table in their own special sauce, they were unlike any cauliflower I have ever had. They could be a meal in themselves.

Chickens air-drying in the cold room

A parade of sauces, including chimichurri, Douglas fir sauce, brought the main items to new levels. 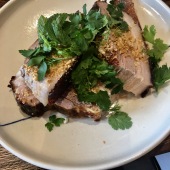 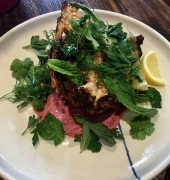 Sides were delicious: umami-dusted sweet potato fries, grilled potatoes, and a chicken soup with a rich broth filled with chunks of chicken, chopped vegetables, barley, and fragrant herbs. Dishes of strawberry- and milk-flavored soft serve ice cream in swirls kept the kids entertained while we waited for our food. Unfortunately we did not get to sample Sarah’s dessert, chocolate sablé ice cream sandwiches. 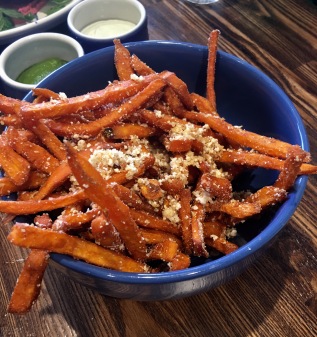 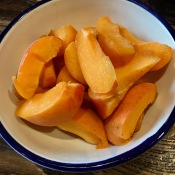 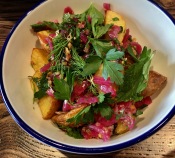 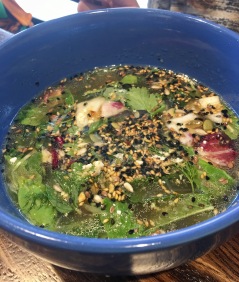 After all that food, we went home and tried to squeeze in a nap. With what must have been a sugar rush, the boys would have none of that. But they and we had had a good day, and RT Rotisserie seemed to be off to a good start.

8 responses to “THE BIG DAY HAS ARRIVED – RT ROTISSERIE OPENS”