It is just at the end of the season for cherries at our local farmers’ market. My son-in-law and grandson love them – don’t we all – so Carol has been making a lot of things cherry, including a delicious cherry, hazelnut, mâche salad. One of our Sunday dinner conversations focused on all the different things you could do with cherries. Lots of recipes were discussed, but the conversation kept coming back to Cherries Jubilee. The dish has such a romantic name, and it conjures up images of elegance and maybe a little bit of indulgence. Especially for the younger members of the family the thought of leaping flames at table side is the most exciting aspect of the dish. The last Cherries Jubilee that I remember at home was nearly 40 years ago. The most memorable Cherries Jubilee was not even the real thing. Our ski patrol had an annual camping expedition, always held in the dead of winter. On a weekend, after the lifts had closed we gathered at the lift shack on the highest run on the mountain. Then we would ski off to an isolated spot in the woods, pitch our tents before dark, and prepare an evening meal. The first year, everyone brought freeze-dried stew or canned tuna. Everyone except Bob, who was the most experienced mountaineer. We thought he would bring some sort of dehydrated food from one of his expeditions. Instead, he brought an elaborate main dish and then prepared flaming canned cherries that he ladled over a handful of fresh snow in each camper’s dish. That set the mark, and each year thereafter (this being a highly competitive group) the challenge was on for who could make the most elaborate and exotic meal out in the winter wilderness.

With that story in mind, I decided to make Cherries Jubilee for the next Sunday family dinner. I bought a big bag of cherries – and then for various reasons our dinner was postponed. I still needed to do something with those cherries, so I decided to make a cherry pie, actually a cherry galette. I used a commercial pie crust to make it easy, and I added the Kirsch that would have gone into the flambé. It turned out to be simple to make and a good use for cherries before they spoiled. If, when our Sunday dinners resume, there are still cherries available, I’ll go back to my original plan. Otherwise, the family will have to be satisfied with Bananas Foster. 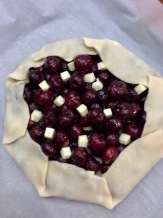 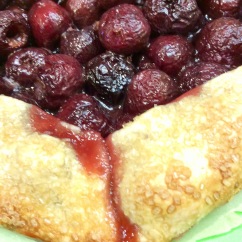 Cook’s Note: Carol has an electric cherry pitter which makes short work of the task. I have a little device that pits cherries one at a time. The job takes longer, but you can turn on the TV or pour a glass of wine or both to make things go faster. 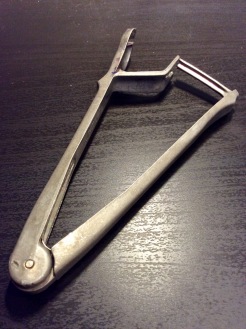