I’ve discovered that Californians like to identify significant landmarks with “The” tacked on to the front. This last week, we visited our children and their families in The Bay Area. To get there, we drove up The 405 (Interstate Highway 405) and then The 5 (Interstate Highway 5). We stopped at my son’s house in Silicon Valley (Why no “The”?) and then up The 101 to stay with my daughter in The Presidio. We didn’t visit The Mission or The Tenderloin, but you get the idea. Of course, in Texas, alums are adamant that you know that they were graduated from The University (of Texas at Austin, of course.)

A visit to San Francisco always means we will do a lot of eating, so we went prepared, and we were not disappointed. This post will describe some of the places where we ate. You will probably not have heard of most of them. San Francisco is filled with temples of fine dining that you already know about. They all get lots of publicity, so they don’t need any more. The places we visited on this trip are neighborhood spots in parts of the city away from tourist meccas like Fisherman’s Wharf, Union Square, or Golden Gate Park and Golden Gate Bridge. The food may not be as fancy as in the high-end restaurants, but it is every bit as delicious.

Of course, one of our stops was Rich Table in Hayes Valley. Sarah joined us at the dinner table while Evan worked as expediter at the pass. He used the opportunity to send us one of everything on the menu. Lucky – and stuffed – us. RT is known for its changing menu of cocktails. One thing they like to do is to put a twist on the old classics. The Southern Belle is a delicious variation on the whiskey sour, The Jefferson is a dressed up old fashioned, and the Paradisi is a refreshing spin on the margarita. Probably next week the choices will be completely different. One of the appetizers was described as fried chicken madeleines with Tsar Nicoulai caviar and crème fraiche. The madeleines were made with bits of crispy chicken skin and tasted of fried chicken. I have never before had a savory madeleine. Pork shank spring rolls looked like regular spring rolls, but the filling was seasoned so differently and so elegantly that they were unique. They were paired with black garlic dipping sauce. Black garlic can’t be compared with regular garlic; it has a rich and complex flavor. French onion dip was as far removed from the Lipton’s onion soup variety as you can get. Besides, it was topped with trout roe and wheatgrass and served on a crisp wafer of lavash. For just a bite, pomelo wedges were combined with sansho pepper and wrapped in thin ribbons of hearts of palm. Very tasty and very refreshing. Miyagi oysters in their zebra-stripe shells came from Marin, and were served with a toasted sunchoke mignonette. There was more and more, but I have to describe the desserts as well. We had three different ones. The big hit had just come on the menu. It was described as coconut cake with lime meringue and brown-butter ice cream, but it was so much more than that. There is an even newer dessert, but we didn’t get to taste it because Sarah was still working out the recipe. It’s called the Rich Table Candy bar. The components include chocolate cremeaux, pecan butter crunch, and sorrel. The pecans are caramelized and then toasted to give an ethereal crunch. Sarah sent me a picture. 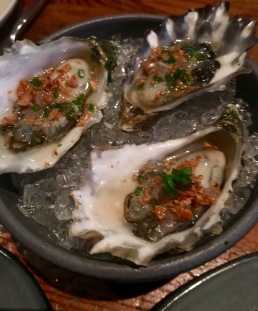 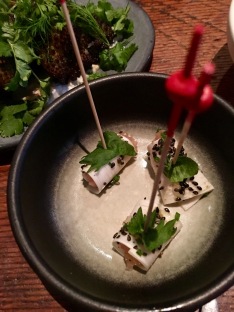 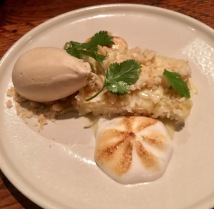 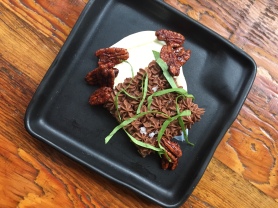 The next day we checked out the space for Sarah and Evan’s new venture, RT Rotisserie. The future restaurant is in the next block, and they have completely renovated the interior. They hope that they will be up and running in a month or so. Renovations always take longer than you think. 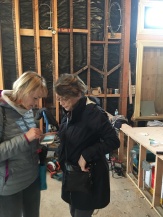 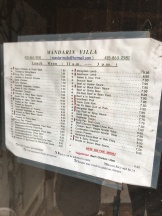 While we were in the neighborhood, we decided to have lunch in a bakery and pastry shop just across the street from Rich Table. The place is called 20th Century Café; it is owned by a woman who has been the pastry chef in a number of high-end, high-pressure kitchens. She knows what she is doing. When you enter the front door, you immediately get the subtle joke. The place is retro from the antique sconces on the wall to the marble-topped tables and mismatched chairs. Most of the menu items are updated versions of old timey classics, and the pastries are like those that you remember from your childhood. They make their own bagels so you know that they are fresh while still being retro. The owner goes along with her own joke. Her red hair is done in bangs and she has bright red lipstick. She wears a frilly flowered dress with matching necklace, and her feet are shod in low high heels and bobby sox. We enjoyed the perfectly cooked baked eggs and “everything” bagels with salmon and a schmear of cream cheese. Three of us shared a slice of the impossibly 10-layered Russian honey cake. Honey was the predominant flavor, but it was not overpowering.

Another day we spent in Outer Richmond. We did just a quick pass down Balboa Street. Outer Richmond is one of the many San Francisco neighborhoods that are rich with small restaurants and a dizzying choice of cuisines. In a single block on Balboa one could choose pho, bánh mi (separate shops), two kinds of Italian, Thai, Chinese, American, Indian, Middle Eastern, French, and probably several others. For our first stop was at an eclectic café called Cassava that specializes in breakfast and in eggs. It also turned out to be a good choice for lunch. The fried egg and avocado sandwich was delicious, with a runny-yolk egg peeking out from the toasted bread. The Randwich! was a hunk of focaccia filled with turkey, cheddar cheese, pesto, and a poached egg – similar ingredients, but a totally different flavor profile. The baked burrata and summer squash was creamy but it reminded me a bit of queso fundido without the chorizo. It was delicious, and with a glass of wine to wash it down, it was outstanding. The evening menu sounds to be much more adventuresome, with braised beef cheeks, salmon, octopus, and fish collar.

Next we stopped by the Marla Bakery because we were out of bread and had enjoyed one of their loaves earlier in the week. The store front caught my eye because of the artistic display of an enormous selection of artisanal breads. Once inside, we bought a loaf of sprouted wheat and another of sourdough. It was not our intention to sit down. But hey, how can you pass up a slice of chocolate cake? We didn’t. 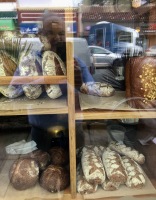 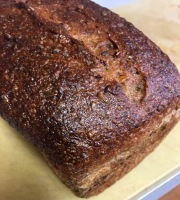 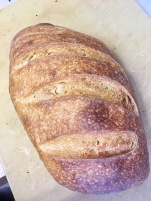 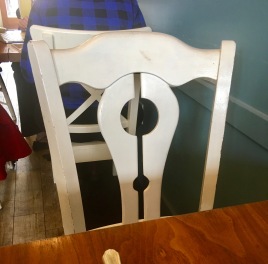 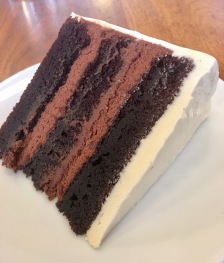 Before we headed home, we stopped back in Silicon Valley to say goodbye to my son and his family. Peter, Susan, and I had lunch at the Cuisinett. This little bistro on the main street of San Carlos gives a fond nod to France. Many of the decorative posters are in French, several of the wait staff speak French, an impressive wine list is French, and the menu is definitely French comfort food. I had the French steak sandwich with brie and excellent frites, Peter had the salmon Provençal special, and Susan chose a delicious soup. 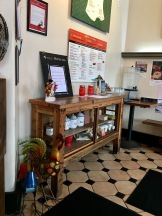 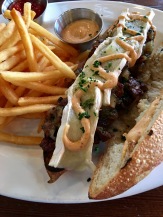 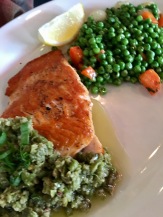 Then it was home. It rained every day while we were in the Bay Area. Apparently it rained every day in LA. When we drove by the San Luis Reservoir on Pacheco Pass it was filled nearly to the brim – something I had never seen. The same was true at Pyramid Lake just before you head down the Grapevine into the LA Basin. I hope that neither reservoir will have the tragic problems they are experiencing at Oroville. 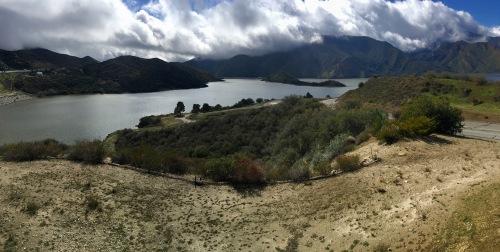