The Sunday family dinner with Carol and her family has become a regular thing. Carol always comes up with interesting and delicious things to cook. In general, she has also tried to make things that are relatively simple so that she and the family can spend most of Sunday on the beach or at one or another family activity. Still, that puts the pressure on me to come up with something that is easy and tasty – with the added requirement that it is not a repeat of one of our earlier menus. This last week my assignment was appetizer and dessert. For dessert I made a mixed berry galette. I have included the recipe in an earlier post, but I had never made it for our family dinners, so its inclusion seemed legitimate. Berry galette bakes up beautifully and has the fresh, sweet taste of spring (even though it’s winter) I have made the recipe a number of times. My most important insight is that you should bake the galette on a parchment or Silpat lined jelly roll pan and NOT a cookie sheet. No matter how hard you try to seal the crust around the berries, some of the juice well leak out. If you have no sides to the baking pan, they will spill into the oven creating a lot of smoke and a huge cleanup project.

For the appetizer, I was looking for something simple and tasty. There is a recipe for deep-fried cheese-filled wonton wrappers in our family cookbook which served as the beginning idea. A search of the internet revealed a large number of versions of filled wontons, baked or fried, lots of fillings, often centered on crab. Since some of the family have an aversion to crab (How is that possible?), that was out. One of our diners has a great affinity for goat cheese. That was in. I picked shrimp, spinach, and mushrooms as other good stuffing ingredients.

These wontons are basted in olive oil and baked rather than deep-fried. I’m not sure if that cuts back on the calories, but it makes one feel more righteous. Our family recipe just calls for the wonton wrapper to be folded over the filling into a triangle. That seems dull. This version pulls the corners of the wonton wrapper into a little pyramid that bakes up with a golden crust. They look difficult to make. Actually, they are just as easy as the boring triangles

There was enough filling for 40 to 60 individual baked wontons. At the end of the evening there were none left. I call that success. 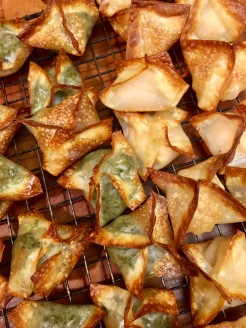