We spent a few days in Estes Park giving our sister-in-law/sister a helping hand during her recovery. Before it was time to go, we drove around town. There were sights to behold. The Stanley Hotel sits high over the town. It is a beautifully preserved white clapboard hotel of the same era as the Coronado Hotel in  San Diego and the Mount Washington Hotel in New Hampshire. It has one further attraction – it served as the inspiration for Stephen King’s The Shining, even though the very scary movie was filmed at the Timberline Lodge at Mount Hood with interiors styled after the Ahwahnee Hotel in Yosemite. Every room in the Stanley is said to be haunted, but room 217 where King stayed is the epicenter of supposed paranormal activity.

The other sight we enjoyed was the herds of elk grazing on the lawns of various homes in the city. The elk are not tame, but you certainly wouldn’t know it. I’m not sure that I would like elk in my front yard, especially during rutting season, although they probably enrich the soil.

Elk herd grazing in the subdivision

Front yard grass is the best

We left Estes Park by way of the Peak-to-Peak Highway, a winding but excellent road that clings to the Front Range, including the spectacular 14’er, Long’s Peak. The day was warm; the skies were clear and deep blue; so the white snow on the peaks and the dark green of the conifer forests was truly breath-taking. We saw herds of deer and even a flock of big horn sheep. 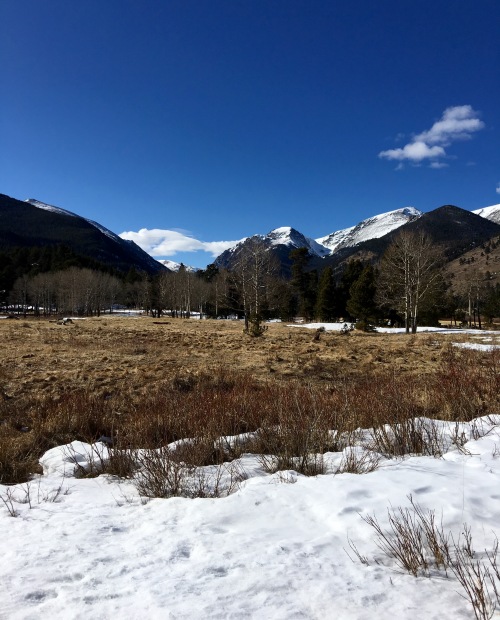 Along the Peak-to-Peak Highway

After a short bypass on I70, we headed off into South Park (the real South Park), an enormous valley surrounded by snow-capped peaks including the Collegiate Range – Mt Princeton, Mt. Harvard, and Mt. Yale. Then we headed over the pass into the San Luis Valley decorated with a wall of several 14 thousand foot peaks of the Sangre de Cristos. It was humbling to think that the famous Mountain Men were the first Europeans to see this country, but the names of rivers – St. Vrain , Platte – reminded us of them.

Then on to New Mexico where Kit Carson hung out, and the mountains were every bit as beautiful. When we got home we discovered catkins on our backyard aspen. Spring cannot be far away. 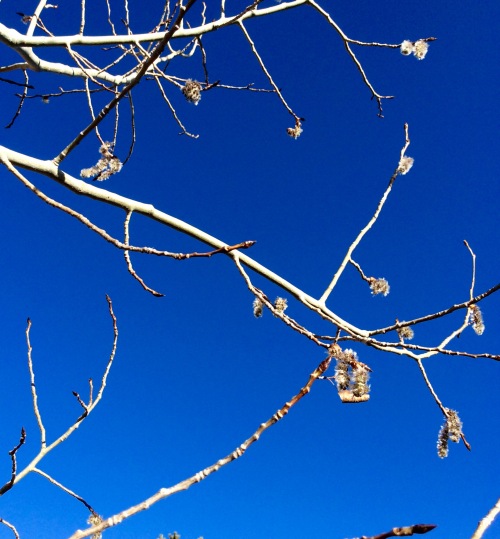 Unfortunately, the cupboard was bare. We had a few onions, so I decided to make French onion soup. I took some modest shortcuts with Julia Child’s recipe. It turned out to be remarkably easy, and the result was delicious. It is hard to understand why French onion soup in restaurants often tastes so bland and watery.

Onions sliced with the mandoline

Onions in the soup pot