FOR WANT OF A NAIL – THE BUTTERFLY EFFECT

On the last leg of our marathon child-tending expedition in California, we headed back to the Bay Area.  This was also sort of holiday, so we drove up Highway 1 through Big Sur, one of our favorite places to visit. 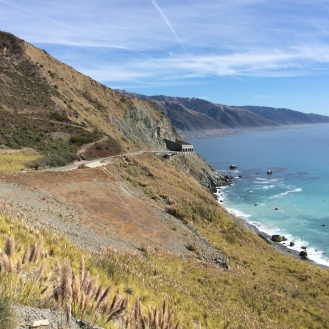 For the first few days we were in Silicon Valley while our daughter-in-law was in Prague at a meeting. (Someone has to do it, right?) She sent us back images of goulash, beer, and sausage. Otherwise, there were no food adventures. We ordered a lot of takeout. I made macaroni and cheese and opened a jar of spaghetti sauce with NO additional seasoning. Both of the girls have very specific and definite food biases, One night at the dinner table the 9-year-old was asked if we could get her anything. Her reply was, “A good cook.” You get the idea.

Sarah and Evan left for Shreveport early in the morning. They talked about getting an Uber car to the airport, and then decided to drive. In retrospect, a big mistake. Then the little one awoke unexpectedly as they were heading out the door. First delay. Interstates 280 and 380 were both busier than expected even though it was early during the morning rush hour. Next delay. Then the airport parking lot was full, so they had to go to the off-site lot. Next delay. The man in front of them couldn’t get the gate to the lot opened so they had to wait for him to solve his problem. The shuttle to the terminal was delayed. But they still had time. Then they faced a long line for baggage and check-in, but they got their bags checked.

Of course, security was impossible, but they finally made it through, only to discover the gate had closed. Unfortunately, their bags had made it on the plane to go through Dallas to Shreveport, so they couldn’t change airlines, and the next available flight was eight hours later. (The lesson from this: don’t check bags if you are running late.) They were told that there were no late flights to Shreveport so that they would have to spend the night in Dallas. Meanwhile their luggage made it to Shreveport.

It is only a 3 hour drive on interstate between DFW and Shreveport, so they decided to rent a car at DFW. By now it was after midnight, and the car rental had a hard time finding a car. Finally, that was solved, and they were in fairly good spirits. UNTIL – about 2 AM, with Sarah asleep as they made it through the East Texas Piney Woods, Evan said, “Oh, my God,” waking Sarah just in time for a loud crash and a huge rush of steam onto the windshield. The steam blocked their view of the road. When they were able to pull over, Sarah got out of the car (Evan was afraid of getting hit by traffic) to find a deer impaled on the radiator. A highway patrolman did come and pulled the deer out of the car, but the car was not driveable.  So the next task was to find a tow truck – a challenge at 3 AM. They were finally towed into the Shreveport airport so that the ruined car could be deposited and the hapless couple could retrieve their luggage. There was no replacement car available, but with some effort one was found at a competing rental agency in exchange for more money.

By this time, it was 6 AM. When they arrived at their hotel, Sarah and Evan were told that their room had been given away, and that the hotel was booked up. Sarah burst into tears; a room was found; and the two were able to catch a couple of hours of sleep before the event.

Everything then went well, and Sarah and Evan had a good time serving as judges for a sort of “Chopped” event featuring some local cooks. They even won a few dollars at the sponsoring casino.

The story ended happily when they came back to their smiling boys. Besides, they will now have a great tale to tell their grandchildren many years from now.

Just remember, your fate may hang on the wings of the butterfly you see in your garden.

14 responses to “FOR WANT OF A NAIL – THE BUTTERFLY EFFECT”