A swarm of bees has invaded one of our canales, the little troughs that drain rain water from the flat roofs of New Mexico. We don’t know the first thing about bees, so that prompted a call to the local bee expert who advised that we call Nicolas, an expert bee keeper who specializes in extracting bee hives. Part of his fee is that he keeps the queen bee for a new pollinator hive. He has many hives that he moves around the orchards and farms of Northern New Mexico. Nicolas grew up in Provence, helping his uncle move hives in the fields of lavender that are so well known in that part of France.

“Nico” assessed our situation and then returned with his bee-keeping gear including his netted hat, heavy boots, and full-length coveralls with thick gloves that extended to his elbows.

Unfortunately, the bees proved more aggressive than usual, although Nico did not believe they had been Africanized. Still, he did not want to use the queen with her “bad genes”  in his pollinator hives. He did plan to capture the bees without exterminating them. That required a new strategy, and we are still waiting for Nico to come back with additional equipment.

As spring has arrived, the bees have become more active. In fact, they dive bomb us during the afternoon if we walk below their nest. They are more peaceful when they are busy among the flowers. 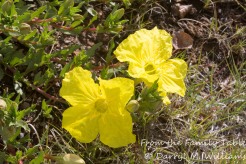 As a gift, Nico brought us a small jar of honey collected from his bees.  He has a business where he sells his honey, Fool’s Gold Honey. That made me think about ways to use honey beside just smearing it on a hot biscuit. What could be a better alternative than a Northern New Mexico sopaipilla? Sopaipillas are deep-fried flaky puffs  very similar to the beignets of New Orleans. They are also related to Navajo (or Pueblo) fry bread and buñuelos that are such important parts of Southwestern cuisine.

As to sopaipillas, there is no doubt that they originated in Northern New Mexico. My first memory of them was in 1948 when I visited my aunt and uncle, then living in Los Alamos. The recipe that follows is theirs.  The popularity of sopaipillas has spread throughout the Southwest, and they now are on the menus of practically every Tex-Mex restaurant, including those in New York City. They are usually served at the end of a meal with honey and maybe butter to pour inside, but they can be dusted with powdered sugar, coated with honey, served with jam, or even stuffed with chili con carne or carne asada as a main dish. Any way you eat them, they are delicious.  My most memorable sopaipillas – actually non-sopaipillas – were served years ago in the Cactus Taqueria in Dumas, Texas. The restaurant is no longer open. While traveling, our family stopped for lunch. We ordered the usual tacos and enchiladas. Sopaipillas were promised as dessert. Next to us, three cowboys were just finishing their meal, so the waitress delivered three big sopaipillas. At first, each of the cowboys poured honey into his dessert from a plastic dispenser sitting on the table. Shortly, one of the cowboys, unsatisfied with the flow of honey from the dispenser, stuck the end in his mouth and sucked away. We paid our bill as quickly as we could, and left with the waitress chasing after us shouting, “You still have your sopaipillas coming!”

After I had written this post, I realized that I had already written about sopaipillas nearly a year and a half ago (October 9, 2013).  Worse, I had told the same stories about my aunt and uncle and about eating sopaipillas in the Cactus Taqueria. I guess that’s because good stories are worth hanging on to, or more ominously I should chalk it up to old age. I need to ask my kids if I have started to repeat myself. I don’t think I want to know the answer.

I have included some of the images from the earlier post, but as a  request for forgiveness, I have added some images of the wildflowers and garden flowers that have attracted bees from our hive.

One response to “SOPAIPILLAS AND HONEY”