Peter, our son, stopped by our daughter’s house in L.A. on his way down the coast to spend some holiday time with his mother-in-law. Before his visit he indicated that he wanted to cook dinner one night. It required some ingredients that we thought we could find at the Grand Central Market, including green and ripe plantains and yuca. The yuca was not to be had, but in the end Peter located some at the neighborhood grocery store.

The dish that Peter chose to cook had its origins when he was in graduate school. He found himself without housing and with very little money. Our daughter, Sarah, was in the undergraduate program at the same university. One of her teaching assistants, a doctoral candidate in mathematics from Colombia, announced in class one day that there was a vacancy in the house where he was living. Sarah passed the information to Peter, and Peter jumped at the opportunity. He wound up living in the garage for several months, rent-free. Then a bedroom opened up, and he became a permanent, rent-paying resident.

As with much collegiate housing, there was a steady stream of old and new tenants. Sarah even lived there for awhile. But the backbone of the place was the three Colombianos who lived there the longest: Carlos, Mario, and Andreas. They became good friends with our children, and an added benefit was that Sarah, the Spanish major, got to polish her language skills, Peter learned how to speak Spanish, and they both learned to cook Colombian foods. Peter still keeps in touch with Carlos, who is now a professor of mathematics at his home university.

Not surprisingly, the house came to be known as Casa de Hillmont after the street where it was located. And it had all sorts of unique features – the carpet with big holes, the reclining sofa we donated, unidentified insects (This was Texas, after all.) and the quirky landlady who made off with a bird bath. Mostly the food was standard college fare like ramen, but there were also Colombian classics like tostones, arepas, and sancocho. Here is Peter’s version of sancocho. 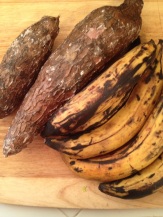 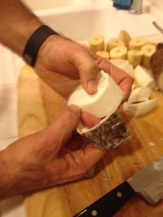 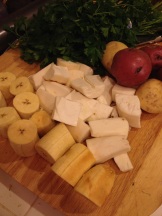 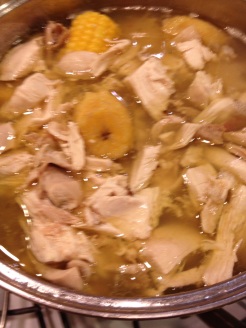