A few months ago I wrote about Carol’s favorite biscuit recipe, the Southern classic “Touch of Grace Biscuits”.  This post is about sourdough biscuits. When we lived in West Texas, for several years I attended an annual all-male overnight fishing trip held by some rancher friends  on the banks of one of the branches of the Brazos River running through a parcel of one of the legendary West Texas cattle ranches. Menus included classic ranch fare – grilled steaks, beans, fish (if we caught enough), hamburgers,  barbecue of all sorts, and of course lots of beer. The highlight, though, was a chuck wagon breakfast. The cooks would arise before everyone else, stir up the fires that had been stoked for the night, and begin to cook huge slabs of sliced bacon and scrambled eggs in surplus Army ammunition cans set over the open fires. They also stirred up the dough for sourdough biscuits to be baked in old-fashioned spiders (three-legged Dutch ovens with flat lids) that would be buried in the coals of the campfires. This was a feast for a king, or at least some satisfied West Texas cowmen.

Sourdough biscuits need to be started the night before you serve them at a cowboy breakfast out on the range, so be sure to get things going before the libations and campfire stories move into full pace. Hopefully you will have a sourdough starter that you have been treasuring and “feeding” for a long time, but don’t despair if you don’t. You can start your own in a week or two before the cookout. Yeast is a fall back, but it is definitely not viewed with favor out on the ranch. Depending upon how many mouths there are to feed, you will need to increase the recipe. Allow for at least three apiece, because even modern cowboys are hungry.  If you want to bake these at home, you don’t need to dig a fire pit, you can just use your oven. However, the instructions change a bit.

A pan full of biscuits about to go into the oven 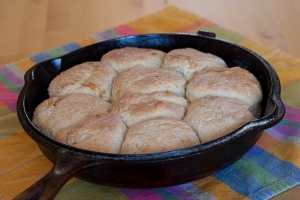 Sourdough biscuits fresh out of the oven

Sourdough starter bubbling and ready to use

Sourdough starter can last a long time if it is properly cared for. We got one from a neighbor in Utah nearly forty years ago. That starter subsequently traveled to Texas, back to Utah, on to Louisiana, back to Texas again, and now New Mexico. Starter can be easily kept out-of-the-way in a closed jar in the back of the refrigerator for years. If you haven’t used it for several months it will have to be revived before using it.  If you can’t revive it, never mind. It is easy enough to start a new one. But don’t expect your friends to help.  Years ago we gave a starter to my brother and his wife.  They enjoyed it for some time and even gave some to their friends. Calamity struck and their jar of starter got thrown out when an unknowing individual cleaned out the refrigerator.  When my sister-in-law asked her friend for a new starter batch, the “friend” refused! It’s always better to be independent of others. Sourdough is slower than commercial yeast so breads made with it often do not rise as much. For that reason, breads made with sourdough alone require a long rise or fermentation, but starter can still be used for flavoring.  The most successful recipes are for biscuits, cornbread, pancakes, traditional country loaves, and French bread.

A LITTLE SOMETHING EXTRA (IN LOUISIANA IT’S LAGNIAPPE)

For those of you who have been wondering about Sarah and Evan’s restaurant, it is moving closer to reality. They have signed a lease on space at 199 Gough in San Francisco’s Hayes Valley. Now they are waiting on the liquor license before they start renovation and moving in. You can read all about the venture on Kickstarter and at the same time have an opportunity to participate in the project. http://www.kickstarter.com/projects/1777795794/rich-table