Tag Archives: The Art of Fermentation

Here’s my take on the brinded vegetables served at Bar Tartine. Even though mine are not nearly as good as those at the restaurant, they have turned out ok.

This exercise began at the farmers market. One of the vendors we especially like had some freshly-dug parsnips. That got me to thinking about brining some root vegetables, and I found some turnips and carrots at the grocery store. I couldn’t find anything green – I guess broccoli would have worked – so I settled on a mix of the four.

Then, of course, I had to drag out my Harsch Steinzeug sauerkraut crock. The task also gave me the opportunity to try out my copy of “The Art of Fermentation” by Sandor Ellix Katz. My daughter, Carol, had given me the book as a gift, and I was so pleased because it has become a classic and the “standard” on the topic in just the short two years since it has been published. The only other things I needed were some Kosher salt and water.

My crock is 5 liters, which is just the right size for me, but it comes in larger and smaller sizes as well. If you haven’t seen a Harsch Steinzeur crock, it is a thing of beauty with a gleaming brown glaze, shaped handles, and a straight-sided lid with a stylish knob on top. It is also an example of German ingenuity and practical design. During my childhood, my grandmother made crocks and crocks of sauerkraut. The process was tedious and odoriferous. As well, skimming the scum off the top of the crocks took lots of attention for weeks.

My crock overcomes all of those problems. Inside are two half-moon weights that fit tightly together to keep whatever you are brining submerged. There are notches in the rim to provide escape for carbon dioxide, and there is a shallow trough around the lip that you fill with water to form an air-tight seal. That cuts down on the smell of fermenting vegetables. Once you have your system set up, and the vegetables start to ferment, you will hear an occasional “frog croak” as a burp of carbon dioxide escapes. That’s reassurance that things are going alright.

Some briners are careful to weigh out the salt and to balance it with enough water to make a brine of specific concentration, but you don’t need to do that so long as you make sure to add enough salt to make a good brine. Even though I peeled the vegetables, you don’t have to do that either, but I thought they would be more attractive with their peelings gone – especially the turnips and rutabegas.

I harvested my vegetables after about ten days of brining. They were still crisp with a briny, slightly pickled taste. If you want a stronger pickle, you can brine them longer, and you can check from time to time to see if the vegetables are to your liking. Just remember when you repack the crock to charge it with more salt and water and to seal the lid with water as you did at the beginning of the process.

So here’s what I did: 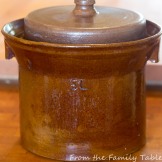