When Mom Mom and Pop Pop lived on their East Texas farm, Thanksgiving was a holiday that the whole family anticipated. Mom Mom would spend weeks planning the menu and then days setting a festive table. All of the children and their respective families would arrive as early in the week as they could to help with wood chopping, cooking, and schmoozing. The giant turkey was the centerpiece of the celebration, but what everyone was really looking forward to was dessert with pumpkin and pecan pie – enough that everyone could have a slice of both, along with whipped cream, of course.

The pecan pies were a joint effort. Pop Pop would sit on the front porch for days cracking pecans with his trusty impact nut cracker, and Mom Mom would use the freshly-shelled nuts for her famous pecan pie. Her version was well known among the ladies in town, and she did several versions from one-bite tassies to lindividual pies to the real thing. She had a secret that she never passed on to the town ladies, who always made their pies with Karo syrup. Mom Mom used only brown sugar and never passed on the secret to anyone except her daughters.

Of course, there must be hundreds of recipes for pecan pie, and there will be plenty more in newspapers and magazines as Thanksgiving gets closer. This recipe, though, is special. It comes from Jessica Maher and was published in the November, 2015 issue of Texas Monthly.

Jessica and Sarah have been close friends since college days. They rowed together in the women’s eights at the University of Texas at Austin. But unbeknownst to one another, their lives followed amazingly similar paths. After college, both were casting about for careers (Sarah decided it was hard to make a living with a major in Spanish and a minor in Italian.) They both wound up going to culinary school in New York, and then their paths crossed again. They both worked for a time at Bouley in Lower Manhattan. Subsequently they both moved on to other New York restaurants, but they kept in close touch. Then they both married chefs, moved away from New York, opened up restaurants while having two kids each, and wondering what to do with their spare time. To this day, though, they stay in touch, often calling one another at least every week.

Jessica and Todd have a very successful restaurant in Austin, Texas, named Lenoir. For a number of years they have been prominent in the Austin restaurant scene, and their place has gotten excellent reviews in Texas Monthly, a publication no good Texan does without. (They call themselves the “National Magazine of Texas.”) This recipe, complete with a gorgeous image, comes from the November issue. 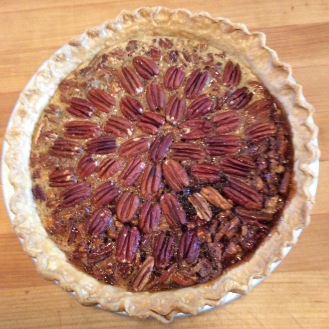 Right from the oven 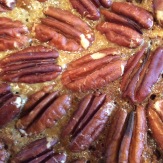 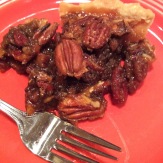 A messy but delicious slice

*Note: Lyle’s golden syrup may be a bit hard to find in the US. It is one of the most popular brands of an English product made during the production of cane sugar. Dark treacle is a thick syrup that has some of the characteristics of molasses. When it is filtered and decolorized it becomes light treacle, also known as golden syrup. Unfortunately there are no good substitutes. Light Karo has added vanilla. Dark Karo may have too much flavor. Maple syrup is not as thick. Some suggest mixtures of honey and Karo or straight agave syrup. The short answer is there is no substitute. Supposedly Lyle’s is carried at Whole Foods and World Market, but if all else fails, you can order it online.