Nearly four years ago I posted a recipe for quick and easy shrimp Creole.  Actually, the real deal doesn’t take that much effort, so I thought another recipe might be in order. The stimulus was my discovery of a bag of shrimp in the freezer. In our de-cluttering effort we are trying to clean out a small chest freezer we keep in the garage. Some decisions of what to get rid of were easy. Down at the bottom of the chest I found dates that went back years (No “Best to use by” labels here.) The shrimp were near the top and represented a fairly recent purchase, so they were moved to the freezer in the house to be used soon. Shrimp creole seemed like the easiest solution. Of course, the star of the dish is shrimp, but it couldn’t be Creole without the so-called Cajun Trinity – onions, celery, and green bell pepper. Those three vegetables are the base for so many Louisiana dishes including gumbo, jambalaya,  and etouffée.  In South Louisiana, many recipes call for Creole tomatoes, which are big, flavorful, and juicy. Large fresh tomatoes of other varieties are a good substitute, but in winter, canned tomatoes will have to do. If you’re using canned tomatoes, use a large can (28 ounces) of whole tomatoes, well drained and crushed in your hands before you add them to the sauce. As to spiciness, some in our household are extremely sensitive to hot chiles, so the seasoning in this version is fairly mild, but you should feel free to spice up your batch as much as you like. Most importantly, enjoy the fruits of your labor.

One of the things I found in the freezer was a big plastic bag of vegetable scraps – carrot peelings, celery bottoms, onion skins and roots, bits of tomatoes – which I had been saving from a couple of months’ worth of cooking projects. For years I have made chicken stock from chicken parts and bones and beef stock from bone. But I never made my own vegetable stock until I picked up a tip from Sara Moulton on her television show, “Sara’s Weeknight Meals”. Save your scraps in the freezer, and when you have enough, put them in a pot, cover with water, and simmer for thirty minutes to an hour, cool, strain, and freeze into cubes to be used whenever you need vegetable stock. Works like the proverbial charm, and forms the beginning of today’s recipe.

The other thing I found in the freezer was a package of shrimp (21-30/pound size), and they became the inspiration and base for shrimp creole. In Louisiana, shrimp creole can be a simple country dish or a fancier version for company dinners and buffets. For that reason, some folks think it is just too complicated for a quick dinner. Too bad, because it is easy to make and fairly fast. This version took me about two hours to prepare, but that was because I was running around finding props and making images. You should be able to whip it up in a flat hour or so.  Served with cooked rice, this recipe should serve 2 to 4 persons. 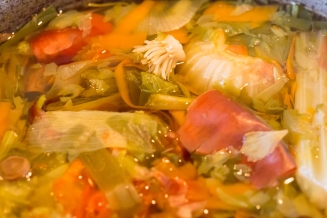 Green pepper, one of the “Holy Trinity” of Creole and Cajun cooking

Celery and onions, the other parts of the cooking “Holy Trinity” along with tomatoes

Scallions, white and green parts, ready to be choppe

Paprika – this is mild, but you may use a hotter variety if you like

Canned tomato sauce makes for easy cooking, but chop up a few fresh tomatoes for texture 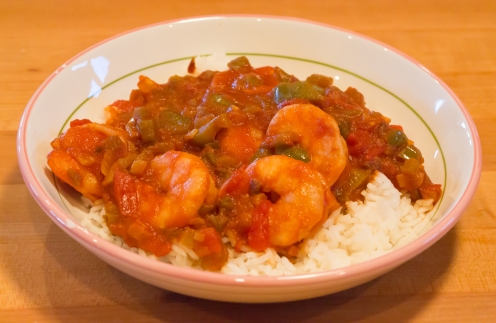 Something you need to know before you start this recipe is that shrimp creole can be as piquant as you like. For family reasons, we don’t put much heat into Cajun and Mexican dishes, but if you enjoy heat, by all means use the hot sauce with abandon. For this dish – since it is from Louisiana – I suggest either Tabasco or Trappey’s.