Finally. Everyone in the family is back where they are supposed to be. The chefs are back in the restaurant. The scientists are back doing what they do. The college kid is in college, and we are back home resting after child care. Carol was the last to return after a business trip to Hawaii. Because of a comedy of errors she missed her return flight. Fortunately she made the red-eye and was back home in time for the first Sunday family dinner since all of the moving around began. In honor of her Hawaiian “vacation” I decided to make ham with pineapple in as simple a version as possible along with cheesy grits (as appropriate a combination as shrimp and grits). Asparagus vinaigrette finished off the meal.  Asparagus was abundant at the farmers market because Southern California is blessed with a second growing season. Along with fall apples we are beginning to find spring vegetables.

Unless you are over 50, there is a good possibility you have never seen a whole ham festooned with rings of pineapple centered by bright red maraschino cherries. In our family while I was growing up it was considered one of the fanciest dinner offerings. The dish showed up repeatedly in magazines and advertisements. These days not so much. It gets harder and harder to find a bone-in whole ham. One of those things provided a 1950s family with a week of meals: first a festive Sunday dinner, then sliced ham with red-eye gravy, sandwiches, ham and potato casserole, and finally ham and bean soup. These days you can often only find tiny little hamettes (water added) or sliced or diced ham products.  And the idea of pineapple rings, especially when they are centered by a bright red maraschino cherry has fallen out of favor. For this recipe I settled for the largest whole ham slices with the bone still in. I think they made a good substitute, and there was even some left over. I also went retro with the pineapple slices and cherries. Everyone seemed to enjoy it. 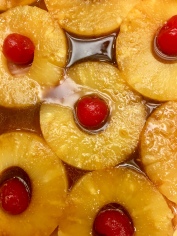 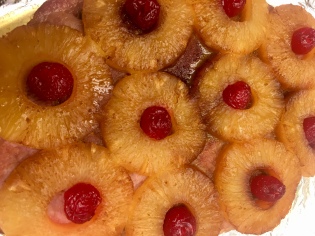 Baked and ready to serve