Susan has long been known as the pie baker in our family. Her crusts are always flaky; no one else can seem to master the skill. She says that it is something her mother taught her, and that the only secret is to keep everything cold.

Because of her reputation, she was drawn to a new cookbook on Sarah’s shelf when we were in San Francisco. The book is titled, The Four & Twenty Blackbirds Pie Book, (Grand Central Life & Style, New York, 2013).  It won an award by the James Beard Foundation as one of the best cookbooks of the year. The recipes sound wonderful, and the illustrations are beautiful. On top of that, the authors are two sisters, Emily and Melissa Elsen, from South Dakota who have gained fame in Brooklyn running a pie shop with the same name as the book. The two women hail from the little town of Hecla, population 224 ±, located just a few miles northeast of one of the main metropolises of South Dakota – Aberdeen. That’s where many of my relatives live and close to where both of my parents grew up, so it has some personal interest.

I ordered a copy of the book so that Susan could study it while we were in Los Angeles with our grandchildren there. I was hoping she would be inspired to bake, and I was not disappointed. She baked two pies that both disappeared quickly.

Cover of the cookbook

The first pie was a lattice-topped peach pie. Susan usually makes her crusts with vegetable shortening, but this time she followed the cookbook and used pure butter. It turned out not to be as flaky, but the flavor was outstanding. Judge for yourself about the beauty. Peaches came from the local farmers market. 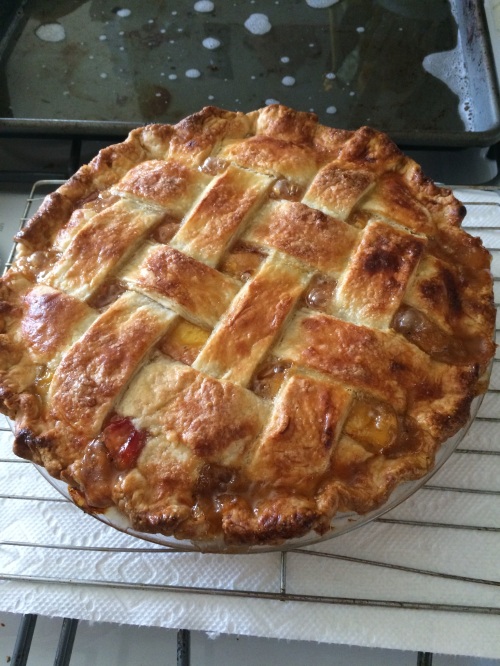 A slice of peach pie

The second pie was a black bottom lemon pie. Susan again used pure butter for the crust. For the filling, she made ganache and a lemon curd according to directions  from the cookbook. The only change to be made was that the recipe called for 30 minutes in the oven. In the end, it took twice that much time, although that could have been because of the oven. In any event, a warning to watch the baking time, and make sure that the lemon curd has set up at least three inches from the edge of the pan before you take it out to let it continue cooking while it is cooling. 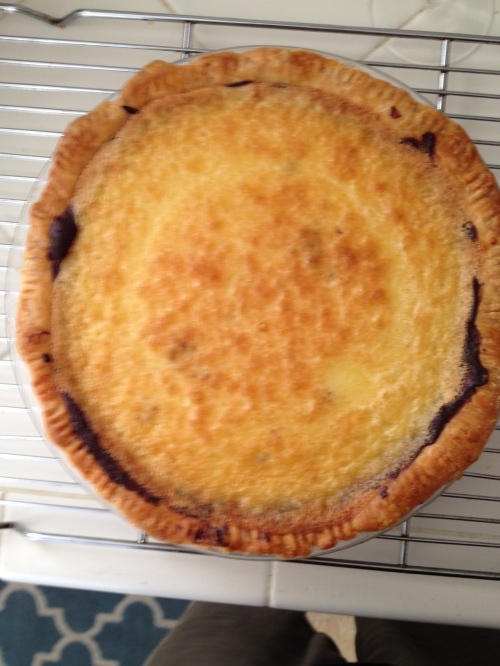 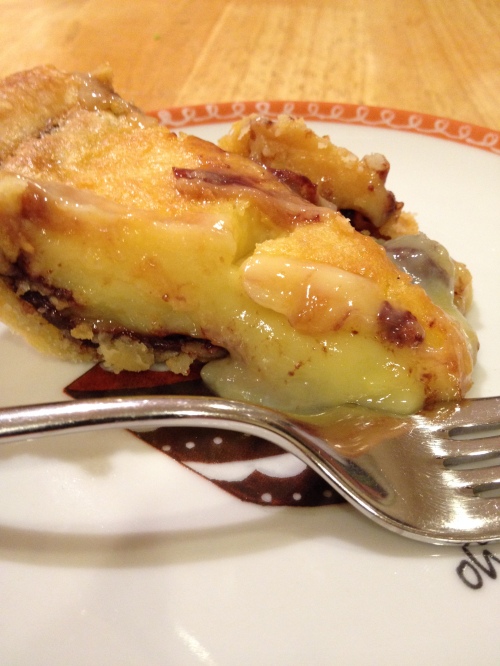 Glad the Pie Lady has not lost her touch, and with this beautiful cookbook, she may continue to surprise us with new delights.

I remember days in my grandmother’s back yard in the spring. She had three very old and very large rhubarb plants growing under a huge cottonwood tree. The leaves of the rhubarb were enormous – and of course inedible – but the children would pick a stalk, pull off the outer rind, sprinkle a little salt, and then pucker up our mouths from the sour-salt taste. That was fun while we waited for the sweet rhubarb pie.

Rhubarb has been a feature of our local farmers market for several weeks, and strawberries are just now becoming available. It’s the beginning of summer, and I think of rhubarb as a harbinger of spring. Never mind that my seasons are messed up, rhubarb and strawberry pie seems like the perfect thing to bake right now, so here goes:

Pie crust mix after cutting in the vegetable shortening

Baked pie on the cooling rack