Now the Presidio has been taken over by the National Park Service. The apartments for enlisted men and NCOs have been substantially upgraded and are now available for rent. Many of the officers’ homes have been converted into boutique offices or upscale housing. The base hospital has been turned into very stylish apartments. I have been told that the base commander’s home now rents for more than $30,000 per month. From the outside it is a grand house, and the views of San Francisco Bay are amongst the best in the city.

There are tennis courts, a beautiful golf course, and miles of walking and biking trails woven amid great stands of eucalyptus and pines as well as huge beds of native plants.. All of this is left over from army days. Not hard at all to see why the Presidio was such a choice assignment.

Some of the administration buildings have been converted to tourist attractions. These include an interesting Walt Disney museum, George Lucas Productions, a bowling alley, and a conference center. The Crissy Field airstrip has been turned into a waterfront mall of dark green lawn, perfect for flying kites or for outdoor events.

The scenery is spectacular. The Golden Gate Bridge is right there; the Marin Headlands are a beautiful view; and the imposing cliffs of Land’s End rise from the other direction. I forgot to mention Baker Beach, popular with the whole city.

View of Marin Headlands, Golden Gate Bridge and the Presidio from Land’s End

With all of this activity and the wonderful attractions, there are not many places to eat. Fortunately, there is the Presidio Social Club near the Lombard Street Gate. During the Second World War, a barracks building was converted into clubhouse for enlisted men and women. Over the years, it had become a bit shabby and then with the imagination of the Park Service the place was refurbished and opened as a charming restaurant and bar.  The walls are covered with images of people from past days having a good time. The rooms are furnished with old-timey lights and spare-but-trendy chairs and tables. There is a nice but limited selection of wines, and it is a good place to get that old San Francisco classic, the Negroni. The food is well-prepared and includes some creative takes on comfort food – deviled eggs, meatloaf, grilled cheese, and chicken salad – as well as some more substantial offerings.

Bar at the Presidio Social Club 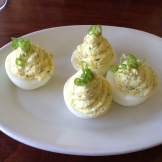 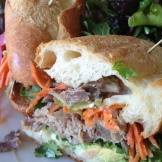 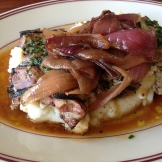 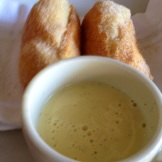 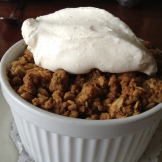 More famous San Francisco restaurants like Greens are not too far away, but the Social Club is definitely a great place for a break during your visit to the Presidio.

San Francisco is one of the great cities of America with endless things to see and do. Of course, the Golden Gate Bridge is iconic, but the beautiful bay, the wonderful Victorian houses, cable cars, winding Lombard Street, the Marina and Fishermen’s Wharf, the Ferry Building Farmers Market, and Coit Tower are all landmarks on most tourists’ check lists.

Often the Presidio gets overlooked, and that’s too bad because it is one of the real treasures of the Bay Area.

The Spanish established presidios (military garrisons) to protect their territories as they moved further and further into what eventually became the American Southwest. Their advance into California was relatively late, and San Francisco Bay was not discovered until 1774. The Presidio at San Francisco was established in 1776 to protect what was then called La Boca del Puerto de San Francisco – the Mouth of the Port of San Francisco – a name that continued until the 1840s. In 1846, the straits between the Marin Headlands and Land’s End on the San Francisco side were renamed by the famous explorer, John C. Fremont, who said they had the same importance as the Golden Horn in the Bosporus. The renaming occurred two years before the discovery of gold at Sutter’s Mill. I guess Fremont knew what he was talking about.

The Spanish also established a small pueblo named Yerba Buena to support the presidio. The little town was in the area now known as the Mission District where the Mission Dolores still stands. These were the beginnings of today’s modern San Francisco.

The garrison was a constantly occupied military base for over 200 years, under the jurisdiction of Spain, Mexico, and then the US, until it was decommissioned in 1995. At that time, the Presidio was turned over to the US National Park Service with the charge to develop the facility as if it were a national park but with the requirement that, unlike a park, it must generate enough revenues to make it self-sustaining.

That charge has been taken seriously. Military housing has been converted into apartments and beautiful residences which are well-maintained, highly desired, and often available only after spending time on a waiting list. Barracks and the world-famous Letterman General Hospital have been converted into office buildings, museums, and workshops for such companies as Disney and George Lucas Productions. There are public golf courses, abundant hiking trails, campgrounds, and beaches open year-around to the public.

Scenery is spectacular. The famous Golden Gate Bridge has its southern access from the headlands in the Presidio. The view to Land’s End, with crashing surf, rugged rock outcroppings, is a gorgeous part of the walk along the ridge leading down to Baker Beach. There are hawks, hummingbirds, many other bird species, coyotes, and smaller mammals. Chances are pretty good that you can catch a glimpse of at least one of these creatures. Flowering plants, towering trees including the beautiful but invasive eucalyptus, and plenty of herbs fill the woods along the trails. 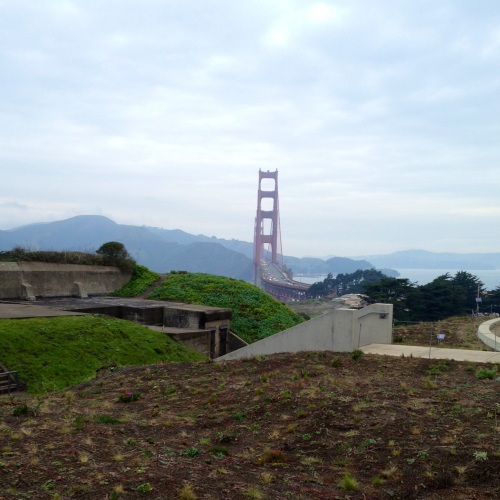 View of the Golden Gate Bridge from near the Main Post

The Park Service has not ignored the stomach. There are several restaurants and more in the process of development. The Presidio Social Club may be the most popular, because it is close to the Walt Disney and George Lucas facilities and is a popular place for business lunches. Still, it is large enough that you may not need to wait too long for a table.

The restaurant is actually housed in a converted barracks that once served the famous African-American “Buffalo Soldiers” who played such an important role in opening up the American West.

The Social Club  serves both lunch and dinner.  The menu is not large, but you should be able to find something to suit your fancy.

For a recent lunch, I got a grilled meatloaf sandwich with melted Gruyère cheese. The sandwich came perfectly grilled on real pain de mie, not white sandwich bread. The meatloaf was juicy and cut to just the right thickness. Gruyère cheese and Dijon mustard set it off to a T.  The side salad of baby greens was dressed exactly as it should be with enough vinaigrette to flavor the lettuce but not so much as to be cloying. Susan got the Dungeness crab Louie salad which came with mollet eggs in a very large serving with lots of fresh crab. The only downside was that there were several shells that had been missed when the crab was picked over. Sarah says that to avoid that unforgivable restaurant sin, Rich Table uses a black light which causes bits of shell to glow a bright blue – who would have thought!

For dessert we split an order of brioche beignets served with creme anglaise. There are actually four beignets to an order, but they looked so good that we dived in before I took the picture.

The wine list was small but well-chosen, and the prices were reasonable. Service was excellent, and the surroundings were attractive and historic. The restaurant is a keeper, especially if you take my advice and make a day of visiting the Presidio.