I saved three of my farmers market Meyer lemons to make something sweet. I didn’t want to make lemon curd or a regular lemon chess pie, as those seem to be what most folks make. Instead, I decided to make a Bavarian cream and turn it into a pie, with a few modifications of Julia Child’s recipe in volume 1 of Mastering the Art of French Cooking. The Bavarian cream uses crème anglaise as the base so it takes a bit of effort.

I thought the pie turned out pretty well. The test of that was my wife, the Dessert Queen, who had a piece for breakfast, lunch, and dinner – with an occasional bedtime snack – until it was gone. The pie is not something you want to try in the afternoon before a dinner party. The good news is that it is so rich that it can easily serve 16 people. 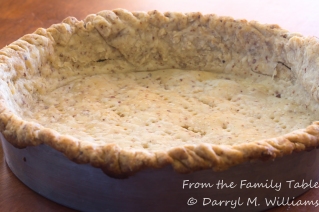 Meyer lemons, zest removed and ready to be juiced 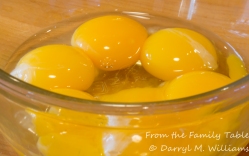