I have been away from the blogosphere for much of the month of January. Instead, Susan and I have been opening boxes after our move from Santa Fe to Southern California. In spite of downsizing, we are still trying to figure out how to cram the accumulations of over 50 years of marriage into our condo that is a lot smaller than the house we left.

For nearly three weeks, our focus has been on getting settled in, but we have made time to spend with our daughter and her family. Carol has suggested that we start a new tradition with family dinners, alternating between our homes every Sunday. Everyone gets a part of the meal to cook. This week, I was assigned dessert. Carol is a great dessert cook, and so is her mother. The pressure was on. It occurred to me that apple pie is a favorite for most, and it certainly fits in with family tradition.

I was right. Apple pie was a big hit, especially with the teenagers who went back for seconds. The recipe I used was my modification of a recipe published by Sam Sifton in the New York Times. His recipe was a modification of one by Kierin Baldwin, a well-known NYC pastry chef. The key to the pie’s success is cooking the filling before you put it in the pie. I added lemon juice and a good splash of Calvados. Cream instead of the usual egg wash gives the pie a nice sheen. I also increased the cornstarch so that the filling became custard-like. For that reason, it is extremely important to let the pie cool completely before you serve it. Also, use a glass pie pan if you can. Everything seems to bake more evenly. Confession: I used a commercial pie crust. If you’re a purist, make your own.

One other diversion we have been able to do when we can’t open another box is to go to the shore and watch the sunsets. This image is of Point Vicente and its lighthouse just as the sun is setting. Truly a beautiful spot. 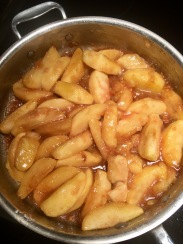 Assembled pie ready for the oven