We have been spending several days in San Francisco, watching two of our grandsons while their parents are off to London and Paris for a cooking demonstration along with “professional observation and study” of some amazing restaurants in both cities. I have been in charge of packing lunches, and each evening I look at the lunch boxes to see what has been eaten. It is usually a big let-down but also a stimulus to pack something they will eat. Pirate’s Booty seems to be a sure-fire winner. Keep in mind that they are six and three years old. Still.

Susan and I have been sharing breakfast duties. Of course, there are always toast soldiers and dry (no milk!!) Cheerios to proffer, but that gets monotonous, even for the cook. So far, Susan has been the winner with plates that include maple syrup or – the kids’ favorite – Louisiana cane syrup from Shreveport. Taking a cue, and wondering what to do with a dried-out hard loaf of French bread that Sarah had left after using part of it for Thanksgiving dressing, I decided to make French toast.

“French toast” apparently got its name in England; there are other names for the dish in other countries. In France and New Orleans it is known as “pain perdu” i.e. “lost bread”. I’m not sure about Paris, but I am certain that it is a staple in New Orleans. Most of the cafes and bistros that are open for breakfast in the French Quarter feature it.

Honestly, I am not a big fan of French toast like my mother used to make. Slices of store-bought sandwich bread dipped in egg and fried always seemed like  a soggy egg and toast. But pain perdu is a totally different experience. Done properly the dish should be puffy and golden with a crisp outside and a custardy inside. The secret is to use good-quality dry bread and give it enough time to soak up the egg and cream bath.

One egg per slice

French bread soaking up the sauce 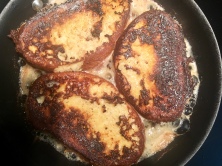