I have been attending a creative writing class for several years. The group meets once a week and is led by a young woman who is an incredibly gifted poet. A new group enrolls every four to six weeks, and although there are always new members, there are several regulars who have become good friends. The class includes a professional actress whose writing is filled with beautiful language and images; a retired Orthodox priest who tells and writes wonderful stories about his adventures among Native American tribes throughout the West; a scientist who writes passionately about the environment and climate change; a retired journalist who makes us laugh with his stories about growing up; and a political activist who has a famously unfinished novel about feral pythons in the Everglades.

Our current series of workshops comes to a close this week. I thought some kind of snack would be a good way to say goodbye to all of the current participants. It seemed to me that nothing would be more appropriate for the group than some Proustean Madeleines. We won’t have any tea to dip them in and will have to make do with bottled water. I decided, though, that maybe rather than ordinary vanilla-flavored cookies the group might enjoy some made with Mandarin orange (actually “Halos” from my refrigerator) and poppy seed. Here’s the recipe. It is amazingly easy, and the only challenge is to find a French Madeleine pan. Never mind if you don’t have or can’t find one. Muffin tins will serve as fine substitutes. The batter is, after all, a French Genoise 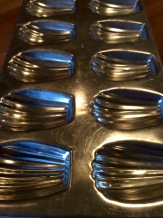