This was the weekend for the Chili Appreciation Society International (CASI) world championship in Terlingua, Texas. Around 300 competition chili cooks from all over the country were there along with their families and friends. I was not there. It is an invitational event, and all of those cooks have been entering cook-offs all year-long to collect enough points for an invitation. I am home. We have returned from California, having enjoyed the California Chili Cook-Off Championship and then an extended visit with our family in the Bay Area. It should be apparent by now that I did not win anything at the cook-off, but it turned out to be a lot of fun. On top of that I learned a lot about chili competitions if I should ever decide to enter another one. This post will include lessons learned along with a chili recipe based upon my non-championship chili  but made milder for my good wife who has no tolerance for spicy foods. The recipe also will contain the greatest of heresies – pinto beans and tomatoes. Those and the garnishes cut the piquancy of the dish and make it a family favorite. If you want a hotter chili, just double all of the amounts of chili powder. You can order these specialized chili powders on line from Pendrey’s Spices in Fort Worth, Texas or Mild Bill’s Spice from Ennis, Texias. If you don’t want to go to that bother, you can just use store-bought chili powder. You can even try a combination of the stand-bys: McCormick’s, Gebhardt’s, and Mexene. LESSONS LEARNED 1. Don’t be too ambitious. It rapidly became obvious that on my second attempt, it was foolish to enter contests for the best salsa, the best guacamole, and the best chili. That clearly wound up being too many balls in the air. 2. Try not to have anything to chop. Cutting up avocados, green onions, and tomatoes for a half-gallon of guacamole is nearly a full-time job in itself. Besides, having sharp knives anywhere in the vicinity of the booth is dangerous. A sliced finger will send you to the first aid station or the emergency room. 3. Grease is the challenge of the chili cook. A pool of glistening red grease floating on the top of the turn-in cup is probably the surest way to be disqualified. It presents a paradox that even the most accomplished cooks wrestle with. Most use 80/20 ground beef. That is, 80% meat and 20% fat. The fat definitely enhances the flavor, but it is also unattractive and needs to be removed. Some champion cooks make huge meatballs and boil them in water for 30 minutes before they add them to the chili mix. That gets rid of the grease, but it reduces the amount of umami savor from the Maillard reaction developed with browning of the meat. Some cooks brown the meat and pour off any extra grease, but they are still stuck with a lot to deal with. Compromise solutions include browning the meat balls before boiling or boiling and straining the meat after it has been drained. It seems to me that both of these approaches sacrifice some of the umami. Another alternative would be to blot the browned meat in a clean kitchen towel. An approach all good cooks undoubtedly use is to skim any grease that rises to the top during cooking, using a small spoon or ladle or a wad of paper towel. There is a final mop-up of the sample ladled into the turn-in cup. Whatever, it is a problem to be dealt with. 4. Be sure to bring plastic bags for trash and a container to hold discarded liquids. You would be surprised at how much trash one generates just cooking one pot of chili. It may easily fill up a household trash bag, so be sure to bring plenty. Another problem is what to do with all the production liquids, including the water for boiling meatballs, drained grease, and skimmings. It is considered bad form to pour any of that on the ground. And you are responsible for cleaning your booth. 4. Camp stoves are not the same as kitchen stoves. I practiced several times making chili on the stove at home, but it was an entirely different experience on a butane camp stove. The flame kept going out, and it seemed like it was either on – burning things – or off – not cooking as I had thought it was. Fortunately, my friend, Reggie,  had brought a butane fire lighter or I would have used up a box of kitchen matches. However, the experience pointed out the need to practice on a camp stove under challenging conditions. 5. Visitors can be distracting. While we were busy cooking our competition chili and worrying about the deadline, crowds kept coming by to sample our chili, guacamole, and salsa. It was fun to meet all the different people, but it certainly increased my anxiety level. 6. You will need a lot of luggage. When you travel to chili cook-offs, you need to have everything you need. Of course, that means your ingredients, your utensils, and your stove. There are other things to worry about: the contest sponsors may or may not furnish a table and chairs. You need both. An umbrella or other cover is handy to shield you from the sun and rain. If you are entered in the showmanship contest, you will need all of your props along with lots of giveaways and your pirate costume if that is your theme. Clearly, at least one and maybe two of the largest suitcases you can find are important. Unless, of course, you do what many fierce competitors do. They buy a motor home so that they can pull up next to their friends on the circuit, spend the night, have space for all of their gear along with a refrigerator well stocked with beer and/or wine.

Liquids you need for the gravy

Three ounces of pork stew meat. You could substitute a pork chop.

The mix of spices to be added to the gravy. This is the first of three.

Chili with beans and tomatoes added 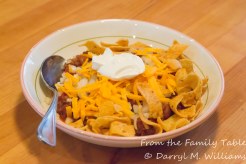