What a year this has been! About this time last year Rich Table was a construction site, and Sarah and Evan were wondering if they could open on time. They were also wondering if they would get enough customers to pay the bills.  Their anxieties have been addressed. The doors of their new restaurant opened right on schedule, and almost from the beginning, they have been busy. One of the biggest complaints on Yelp is that getting a reservation is almost impossible. As proud parents, we know the feeling. When we are visiting San Francisco, we need to call Sarah weeks ahead to make sure we have a table. Sometimes we have had to sit at the bar, and once we only got in when there was a last-minute cancellation. 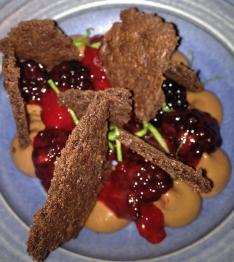 Great reviews on local food blogs and by Michael Bauer in the San Francisco Chronicle have certainly helped with their popularity, but the excellent service by “celebrity” wait staff, creative cocktails, and – of course – the imaginative food have drawn in lots of repeat customers and regulars.

The chefs have travelled to places as far away as Chicago and Mumbai to cook at the invitation of restaurants and chefs in those settings.

Now, even before the first anniversary of their enterprise, Sarah and Evan are enjoying an experience that once they could only dream of. Along with their friends,  the husband-wife team who operate State Bird Provisions in another part of San Francisco, they are among five finalists for the James Beard Foundation award for the outstanding new restaurant in the United States.

For those of you who don’t know, the James Beard Foundation Awards is cooking’s version of the Oscars. It is black-tie/long dresses in the Lincoln Center in New York City. There are categories for all sorts of food-related honorees, including best chef, best restaurant, best restaurateur, best television show, best cookbook, even best food blog (I am not on the list). There are lots of pre- and post-event parties, so it becomes a days-long celebration of food. I am certain that there is a lot of amazing food at all of the parties and events.

I thought you might be interested in the lists of finalists in two categories: Best New Restaurant and Individual Food Blog, so here they are: