One thing I have learned during the stove outage is that it is very difficult to make dessert without a stove and oven. Not impossible, of course, but difficult. You need to bake cakes and most pie crusts. Fillings sometimes need to be cooked on the stove. Even the custard for ice cream needs to be cooked. Since the breakdown, I have made a cheese plate with grapes and sliced pears. The grandchildren thought that was too fancy and not sweet.  I have served ice cream from the store, but that doesn’t count. This week was my turn for dessert for Sunday family dinner. I looked through several recipe books but had difficulty in finding a cooking-free recipe that sounded delicious. This comes from Marion Cunningham’s The Fannie Farmer Baking Book (Alfred A. Knopf, New York, 1984). I have freed the original recipe from the oven by using a packaged graham cracker crust from the grocery shelf. I have also added gelatin so that the filling holds its shape. Key tips that don’t appear in the recipe and that you should follow include making certain that you beat the egg whites so they form stiff peaks. Any less and the filling will collapse. If you need it, a pinch of cream of tartar might help. The cream should also be beaten so that it holds peaks. Chilling overnight is highly recommended. 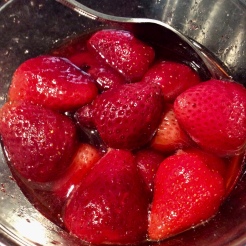 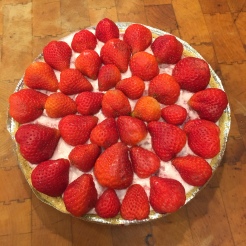