Spring is well along, and the local farmers’ market is in full swing with lots of fresh fruits and vegetables available. Everyone in our local family is on one or another diet, not to mention their variety of food proscriptions: no onions, no mayonnaise, nothing spicy. So when it became my turn to cook our weekly family dinner, I decided it was a good time for salads. Let everyone push to the side whatever ingredient they wouldn’t or couldn’t eat. The main dish was a cross between a pasta and bean salad with the addition of vegetables and eggs from the farmers’ market as well as some canned items from the grocery store. There was a lot of prep time. I shelled fresh fava beans. I roasted corn. There were eggs to hard boil, chicken to cook and dice, and cans to open. But once that was all done, assembly was quick and easy so that I could sit in the family circle and participate in the discussion. The beauty of pasta and bean salads is that there really is no recipe, and you can add or subtract whatever you want. This version came so loaded that finicky eaters could have a field day picking out ingredients. Since I didn’t include onion or chiles and dressed the salad with vinaigrette, I addressed those objections at the outset. I didn’t see anyone picking at his or her plate, 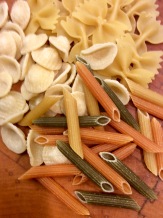