As we continue our efforts to downsize and declutter, I am working on clearing out the freezer. I found a pound of shrimp that needed to be used, but I was at a loss for a recipe. With shrimp, I often make some of our Louisiana favorites like shrimp creole or seafood gumbo. Barbecued shrimp in the style of the famous New Orleans restaurant, Pascal’s Manale, also sounded like an option, but that recipe calls for really large and really fresh shrimp – and a bit more trouble than I wanted. Shrimp and pasta was another choice, but to tell the truth I am a bit tired of tomato sauces, and somehow the combination didn’t seem quite right. I thought of paella, one of my favorites, but maybe substituting pasta for rice would make a good alternative. All of those ruminations made me think of this combination of shrimp and rigatoni without tomatoes and without saffron. My other goal was to make it a truly one-dish meal. For that, I boiled the pasta in fish sauce in the same cast iron pan where the rest of the ingredients would be added. No pasta-boiling pot to clean up. I topped the finished dish with Parmesan – I know, I know, shellfish and cheese are not supposed to go together. Just try it.

So here’s the recipe. 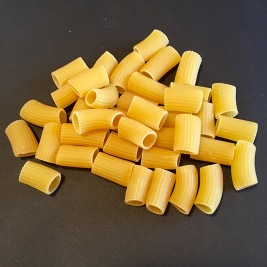 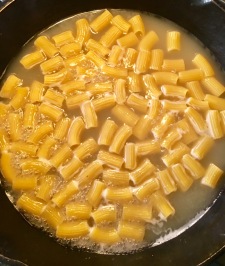 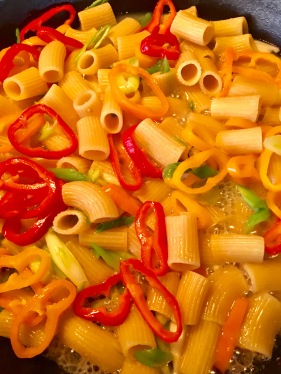 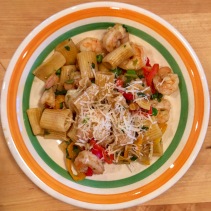 5 responses to “SHRIMP AND RIGATONI”