Here’s another riff on comfort food of the past.  For many mothers of the 1950s, -60s, and -70s, porcupine meatballs or just porcupines were a standby and family favorite. The recipe was included in The Joy of Cooking at least as early as 1943 and as late as 1974, but it had disappeared by 1997. I haven’t been able to find a recipe in contemporary cook books, but there are still several versions on the internet.

My first experience with porcupines came during my graduate school days. I lived with the family of one of my best grade school friends who had moved to Houston. The mother was a very good cook, but her meals were very much of the era. She knew dozens of ways to fix ground beef, and there was nothing that couldn’t be improved with a can of tomato or cream of mushroom soup.

Porcupine meatballs were one of her specialties. Whenever she made them, cheers would go up from the younger children in the family as well as me. The version in the Joy of Cooking called for a can of condensed tomato soup. Her version was more refined, using a can of tomato sauce with seasonings. Both recipes, however, called for rolling the meatballs in rice before cooking them. Internet recipes combine raw rice in the meatball. The recipe that follows uses Mrs. M.’s method.

I have also made two significant changes: first, I have made what are basically hamburgers instead of meatballs (much easier) and second, instead of some kind of tomato sauce, I have used a brown sauce with mushrooms. In part, this is because lately we have been eating lots of Italian dishes with tomato sauces, and I’m getting a little tired of tomato sauce of any sort on any thing.

Sorry, the images are not my best. I confess that the finished dish does not look like much, but I promise that it tastes good – almost as good as at Mrs. M’s table. 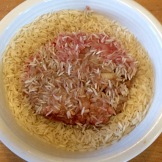 Waiting to be cooked 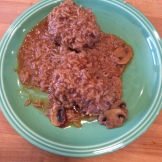 11 responses to “PORCUPINES IN MUSHROOM GRAVY”