It’s actually a little late in the season for rhubarb, but I saw some in the market. It looked so good, that I bought it along with a quart of strawberries. To my way of thinking, rhubarb and strawberries make a perfect combination – in a sauce, a cake, or a tasty pie.

I have great memories of eating raw rhubarb straight out of my grandmother’s garden. I pulled off the leaves, peeled the skin from the flat side of the stalk, shook on some salt, and ate the whole thing, shaking on more salt as I went. My grandmother cautioned me not to eat the leaves as they were poisonous. That was good advice because rhubarb leaves are rich in oxalic acid (along with greens like sorrel) and oxalic acid can precipitate in the kidneys causing kidney failure. The stalks have oxalic acid, too, but not so much to be dangerous. That was good for me as a child. I was never poisoned, but I often had a belly ache.

The recipe I used is based on one from that great baking book, The Fanny Farmer’s Baking Book by Marion Cunningham (Alfred A. Knopf, New York, 1984) 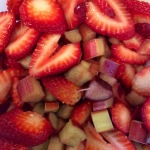