When we arrived back home, I downloaded my camera to see if I had managed to capture any images of our visit to California. Here are a few of those memories:

Among the things we found in our cooler from the trip were some fragments of cheese that we had bought in Lodi. The night before our return home, Peter and his family stopped by our apartment on their way back to the Bay Area from a ski day in Kirkwood. We enjoyed some local wine and a plate of cheese before we went out to dinner.

We had found the cheese at a great little cheese shop on School Street, the main drag of Lodi’s charming historic downtown. Cheese Central is owned by a very pleasant woman, Cindy Della Monica, who clearly enjoys what she is doing. Most cheesemongers seem to have a good time and love to talk about cheese. That, and free samples, helps them sell their products. Karen, Cindy’s very knowledgeable assistant, was happier and more enthusiastic than any other cheesemonger I have ever met. She shared some excellent samples and gave us some very good suggestions.

We wound up buying a French epoisse cut fresh from a three-pound log, a Spanish cinco lanzas, and a Welsh cheddar, along with some crackers and a bit of quince paste membrillo. The cinco lanzas is made  by Queso García Baquero in La Mancha in the style of manchego (even with a similar dark grass imprint on the rind) but instead of sheep milk, it is made from a secret blend of cow, sheep, and goat milk. It went well with the membrillo. The Welsh cheddar was the big surprise. It is called “Amber Mist” and is made by the Snowdonia Cheese Company. The surprise is that the cheese is soft and crumbly because of added Scotch whiskey which adds to the flavor without being overpowering.

We had a wonderful time with Peter’s family; the two girls loved the membrillo and all of the cheeses along with some heart-shaped water biscuits. Even at that, there were leftovers. But not enough for another cheese party when we got home. Still, the cheeses wouldn’t last forever, and they were too delicious to throw out. That’s when I decided to use them for a special mac and cheese. Our three cheeses went well together, but you should be careful with your choices. The cheese should melt, so no hard cheeses. Blue cheeses might overpower any others. Stinky cheese should not be included, and after a two-day road trip the epoisse came close to disqualifying itself.

Somehow mac and cheese seemed to be a bit prosaic. I substituted potatoes for pasta, added some more ingredients, and poured in a little extra whiskey to flavor things a bit more.  I used some Italian guanciale (cured hog cheek) but you can easily substitute pancetta or bacon or even nothing. Here’s the ad hoc recipe. It turned out pretty good, I think. 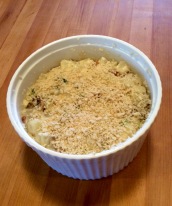