We are in the midst of our final family visit for the holiday season. Our son, his wife, and their two daughters are visiting from Silicon Valley. We had a couple of days of quiet, and now there is once again pandemonium. We enjoy it.

The family arrived the day after Christmas. We had old fashioned New Mexico posole, as we weren’t sure when they would arrive with all of the bad weather in this part of the country.

The next night, we celebrated our son’s new position with champagne, blinis, sour cream, and salmon roe. Then Christmas crackers for the girls. Finally, brisket that had been cooking all day and served with potato latkes along with green beans and mushrooms. It was a festive evening, indeed.

The recipe for brisket is Susan’s. She got it from a friend many years ago when we lived in Houston. Since then, it has been a big family hit. Sarah took the recipe with her to New York City where she often made it for family meal in the restaurants where she worked. She says that whenever it was served, cheers went up from all of the cooks and servers. The secret to success is long, slow, braising with flavorful seasonings. Plan on at least 10 hours of cooking after an overnight marinade.

My daughter-in-law makes wonderful latkes, so I faced that challenge with a little trepidation. There are lots of recipes out there for latkes, and most folks are convinced that their mother’s are the best. I have modified the recipe in Amanda Hesser’s The Essential New York Times Cook Book (W.W. Norton & Co., New York, 2010). The book is an outstanding modern replacement for Craig Claiborne’s classic, The New York Times Cook Book. The latkes got my daughter-in-law’s approval, so I guess they were alright.

Brisket in the middle of cooking 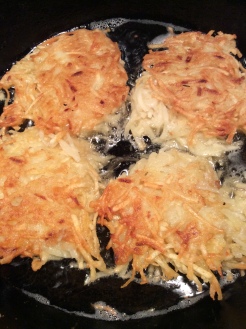 Latkes frying on the second side

10 responses to “BRISKET AND LATKES”