Last week while we were in San Francisco, our son and his family came up from Silicon Valley to spend Sunday with us. Susan rested to catch up with a week of intense child watching while René generously took the four kids to one of the playgrounds on the Presidio.

That gave me an opportunity to take Peter to brunch. We haven’t had a time alone for a long time, so both of us seemed to relish the opportunity. We went to the Presidio Social Club, which has become one of our favorite restaurants on the Presidio. It is housed in a very old barracks building that has been restored and filled with pictures and memorabilia from the days when the building served as a canteen during the Second World War. We enjoy everything about the place: the atmosphere is inviting, the service is good, and the food is very good without being too expensive. Besides all that, it is a short drive through the woods of the Presidio so you don’t have to get out on the busy streets of the city and spend a long time looking for a rare parking space.

The brunch menu is filled with the usual sorts of things that people order on a lazy late Sunday morning. Peter ordered a PSC Spritzer and I got a PSC Bloody Mary. Then we checked out the menu. Both of us focused on the chilaquiles as they are a favorite of everyone in our family. Peter and I have this funny custom that if one orders a dish, the other does not. We agreed that he should order the chilaquiles. Then I saw the huevos rotos. The dish was described as eggs, potatoes, and chorizo. It sounded sort of like my usual, huevos rancheros, and had the additional intrigue that I had never heard of it before. So I ordered it. In El Paso, I had eaten huevos divorciados – two eggs separated by chilaquiles or refried beans and topped one with green sauce and one with red. I had eaten huevos revueltos – scrambled eggs – and migas – eggs with chorizo and crisp tortilla strips. There’s machaca with eggs – shredded beef and eggs. And of course, the ubiquitous breakfast burrito. I had never eaten or heard of huevos rotos. In part that’s probably because it is originally a Spanish dish.

The version of huevos rotos served by the Social Club was so good, that I decided to try to replicate it at home. Here’s my version for 2 persons, but you should be as creative as you want with additional ingredients. I think you will find the dish so good, and so easy, that you will make it often for breakfast, lunch, or a snack. 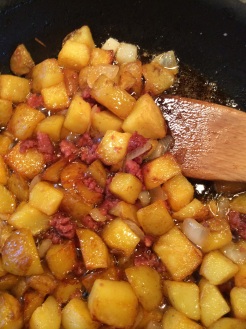 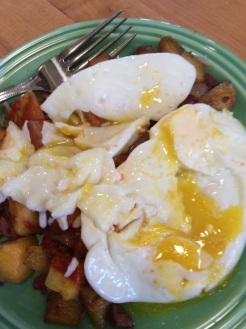