This is one of the most traditional of all Creole dishes not only in New Orleans but also in much of southern Louisiana. According to Emeril Lagasse, the recipe first made its way to Louisiana when royalists escaped the French Revolution and settled in the town of St. Martinsville, called “petit Paris” and located just a few miles south of Lafayette. I have been unable to confirm or refute this claim.

Daube glacée has become less and less popular and is no longer common on restaurant menus. Perhaps part of the reason is that it is really a party dish, served with toast points or other bread. It can also be sliced to make an excellent sandwich. Most recipes make a LOT – often enough to serve 50 people.

River Road Recipes, published by the Junior League of Baton Rouge, bills itself as “The Textbook of Louisiana Cuisine”, and indeed it has been the most authoritative source book for Louisiana home cooks for over 55 years. The recipe there calls for 10 pounds of boneless chuck roast and advises that you mold it in “a vegetable crisper or other large enamel pan.” Emeril Lagasse’s recipe in Louisiana Real & Rustic calls for 3 pounds of beef round and 3 pounds of veal rump roast along with some bacon. Roy F. Guste, Jr., of the family that has owned Antoine’s Restaurant for generations, includes pig’s feet in his version in The 100 Greatest Dishes of Louisiana Cookery.

I think there is little doubt why the dish has fallen into obscurity, and all the recipes I found were way beyond what I was looking for. All I really wanted to do was to use up the meat and broth from my effort with bouilli. As you will see, this is a very simplified version of daube glacée. Remember, when it is chilled it will need more salt than when it is warm.  Plan to decorate it with vegetables, fresh or cooked, in the gelatin and mayonnaise on top, if you wish. Serve with crackers or crostini. If you use it for sandwiches, season it with horseradish and whole-grain mustard. Delicious! 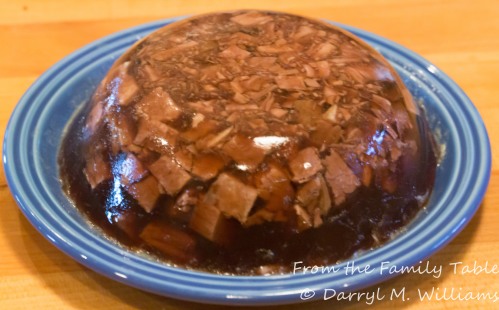