When I wrote recently about Julia Child’s recipe for ratatouille, I reported that she suggested serving it with pot au feu. I was looking for something simple, but the recipe in Mastering the Art of French Cooking served twelve to sixteen people and called for 4 pounds of beef, 4 pounds of pork, 4 pounds of chicken, 2 pounds of sausage, and vegetables. That was more than I wanted to tackle.

I had more in mind boiled beef, which sounded fairly simple and something that would not overpower the ratatouille. There is a traditional Creole dish, known as bouilli. It has been served for decades in most of the old-line restaurants of New Orleans. Perhaps the best known version is served at Tujague’s, which was established in 1856 and claims to be the second oldest restaurant in New Orleans. (The famous Antoine’s Restaurant dates to 1840.) Tujague’s sits on Decatur at the corner of Madison, a block from Jackson Square. Like the rest of the French Quarter, the restaurant survived Hurricane Katrina. It is still serving bouilli. I first enjoyed it in 1962. At the time, I thought it was pretty ordinary – stringy beef served in a watery broth. Since then, I guess my taste buds have matured, or at least changed.  Bouilli was exactly what I was looking for to serve with ratatouille.

This is not Tujague’s authentic version of boiled beef. For one thing, theirs is made with brisket. I am also certain that they use some secret herbs and spices that I don’t know about. Still, I think that my version makes a good, if a bit bland, foil for the Mediterranean flavors of ratatouille. 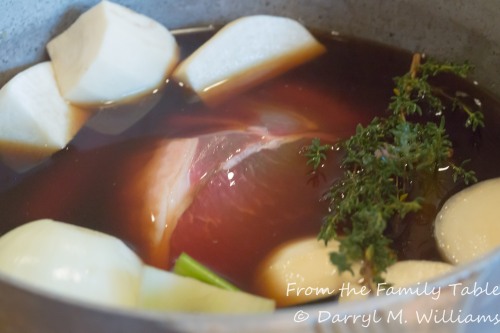 Beef and vegetables in broth starting the slow boil 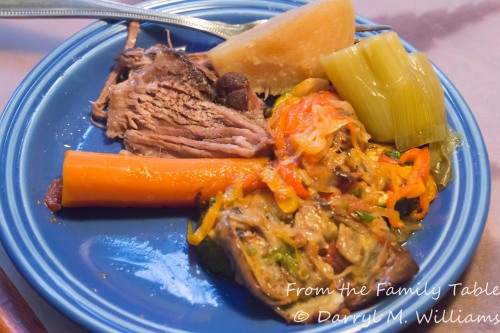 Bouilli with vegetables and ratatouille