CHICKEN PANZANELLA – CLEARING OUT THE FRIDGE

Sarah said that she wanted to cook dinner at least once while she was visiting. I agreed. Who wouldn’t want an award-winning chef cooking in the kitchen. The limit  set for the adventure was that it had to follow her High protein/low carb regimen. The other thing was that I didn’t want to go to the store again, so she decided to use what was in the pantry and the refrigerator.

She chose to make chicken panzanella. I reminded her that the dish referred to a traditional Italian bread salad. She said, “Just don’t eat the bread.” Point made.

I have not been too specific about quantities except for the chicken breasts – we only had two – and the bread – we had already started eating a pound-and-a-half loaf. Adjust the quantities of the various other ingredients to your particular likes and to the size of the group you plan to serve.

Some of the keys to success include making certain that the bread cubes are completely dried out and firm. Otherwise, they will absorb too much of the juice from the vegetables and wind up being soggy. The seedless grapes are a surprise: they make a sweet foil for the other acidic and bitter components of the salad. The avocado is also not a usual ingredient in a traditional Panzanella, but it makes a tasty addition. You can add more lettuce, but it might overwhelm the other flavors of the salad. You can use your favorite vinaigrette, but simple oil and vinegar allow you to adjust the acidity just as you prefer.

Chicken on the grill 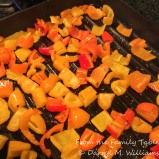 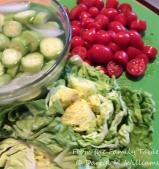 Selection of herbs from the garden

Served up on a backyard table

2 responses to “CHICKEN PANZANELLA – CLEARING OUT THE FRIDGE”