Many years ago, I worked at a hospital named (I’m not making this up) Confederate Memorial Hospital. It was a teaching hospital, so there were many young nursing students and resident physicians. Nearly all of the patients were poor and uninsured. With all those mouths to feed, it is not surprising that the food was particularly uninspired. As you might suspect, the menu included a lot of fried okra, corn bread, greens cooked into oblivion, and grits. Even at that, everyone dreaded the weekend beginning on Friday night and extending into Monday morning. The kitchen staff was all off, except for a skeleton crew. Disposable cardboard trays were used, and the plates and utensils all were changed to plastic so that staff on the wards could clean up by dumping everything in huge trash barrels.

The entrée at Friday dinner, even for patients on special diets, was almost always fried baloney cups.  Now, fried baloney cups are a common Southern delicacy, but they usually are filled with creamed chicken or vegetables. That was not the case at the hospital. The baloney cup came on the middle of a plastic plate with nothing else. It rolled around on the plate, so that for a sick, bed-ridden patient it was difficult to spear with a flimsy knife and fork that often broke in two.

Bologna lunch meat can be transformed by frying, especially when it is cooked with the cellophane rind still intact. The slice of meat puffs up in the middle on the hot skillet and the rind shrinks a bit so that you wind up with a cup-shaped vessel just begging for filling. Of course, any cook worried about finesse will remove the cellophane rind before serving. The interesting thing is that frying enhances the flavor of the bologna.

Well-made bologna is much maligned because of confusion with the super market version that I will call baloney.  Along with its close relative, mortadella,  the real thing can be quite delicate and delicious. The stuff called baloney is what you want to use for this dish. These days, you will have to look around a bit to find baloney with the cellophane rind intact, but even without that, a thick slice of the sausage will puff up in the middle so that you can stuff it.

This version incorporates some other standbys of Southern cooking: tater tot potatoes, American cheese, fried eggs, and mustard greens. It is clear that the dish will not help your cholesterol level, but hopefully it will bring back memories for those of us who spent some of our lives in the South. 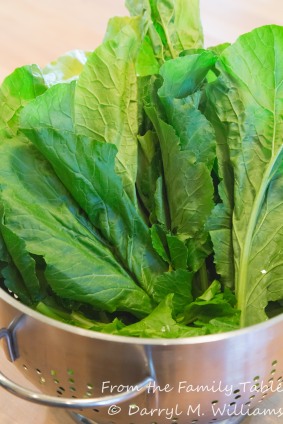 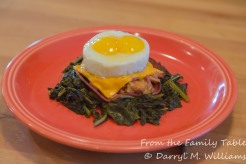 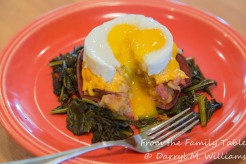 Better tasting than it sounds