A while back I wrote about a classic oyster and artichoke soup from New Orleans. Artichokes are among the  favorite ingredients for Louisiana cooks, both professionals and amateurs. It goes without saying that crab, along with shrimp and crawfish, is another favorite Louisiana ingredient. Combining the two is the basis for another popular Louisiana dish. I first enjoyed it many years ago when Susan and I were dinner guests of a great home cook in Ruston, Louisiana. Globe artichokes stuffed with a savory dressing is a welcome alternative to the usual artichoke bracts (leaves) dipped in aioli or Hollandaise.

Some Louisiana food authorities assert that stuffed artichokes – plain only or with shellfish – had their origin in Italian restaurants throughout the state and then became widely popular. That seems likely, because cultivated artichokes apparently had their origins in Sicily, and Italian cookbooks usually have many recipes using artichokes.  At the same time, I have only been able to find one recipe for stuffed artichokes – that by Giuliano Bugialli in the classic The Fine Art of Italian Cooking, first published in 1977. He stuffed his artichokes with pancetta or prosciutto.

In the USA, Castroville, California, seems to be the epicenter of the artichoke crop. The town dubs itself “Artichoke Capital of the World”, and you can see miles and miles of artichoke fields along the highway or through the windows of the train. Roadside stands abound.

The Louisiana crop is more modest, but it seems to meet the local need. We are nearing the end of the usual season, but with our present world-wide commerce, artichokes are available year around.

Whatever the origin of the recipe or the source of the vegetable, it is easy to see why stuffed artichokes are so popular. This recipe combines crab and Romano cheese, not considered by some to be a good combination. For me, it works. 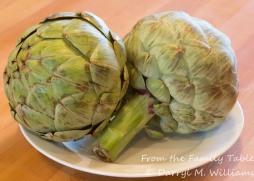 Globe artichokes with a little discoloration from chilling – not a problem 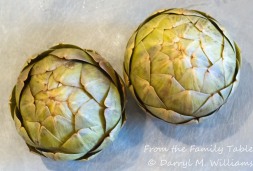 Artichokes trimmed, and with the choke removed, ready for stuffing

Stuffed with topping added and ready for the oven