San Francisco is one of those lucky cities that has lots of really great bakeries turning out really great bread. If you are a bread lover, as I am, that’s important. Of course, it is arguable as to which is the best bakery or best loaf, but Tartine Bakery and their basic country bread have to be on just about everyone’s lists.

Chad Robertson, the co-owner of Tartine Bakery, has  roots in West Texas, but he has travelled to France and probably other places to perfect his craft. He still bakes 250 loaves of bread a day when he is in town. He is driven in his quest to make the best loaf of bread he can, along with pastries and other baked goods. But he is generous in sharing his knowledge. Other chefs in San Francisco have been mentored by him, and now their bread is well-known. An example of that is Outerlands in the Outer Sunset district of San Francisco. Their grilled cheese sandwich on thick slices of house-baked bread is justifiably famous.

Robertson is now getting ready to install a custom-made behemoth of an oven in a new space in San Francisco so that he can increase his baking production. He is planning to open bakeries in Tokyo and maybe London and New York.

He has also written or taken photographs for several cookbooks, including a beautiful book, Tartine Bread (Chronicle Books, San Francisco, 2010). That classic (already) gives detailed instructions and beautiful photos for the home baker. The book also describes Robertson’s method to replicate the characteristics of a baker’s oven in the home. The problem is that the chapter on the basic loaf is 38 pages long, and the recipe itself is 26 pages long. That might be enough to put you off from trying your hand. That would be too bad, because by using those instructions, even a novice (me) can produce the best loaf of homemade bread that he or she has ever made.

You will need to be ready with your own sourdough starter that you have developed, stored, and if necessary rejuvenated by daily feedings of flour and water.  I have previously posted several methods to begin your own sourdough starter. You should also have the equipment for the process. These items can be purchased from King Arthur Flour, Breadtopia, and of course, Amazon if you can’t find them locally.

The recipe is based upon weight rather than volume (the standard for professional bakers), so you will need a reliable kitchen scale capable of registering metric weights.

One essential piece of equipment is the Lodge cast-iron combo-cooker. It has shallow and deep halves. The shallow half serves as the baking surface while the deep half covers the loaf and provides the necessary heat above the loaf for the steam needed for good lift and crisp crust. You can use a regular Dutch oven with the deep half on the bottom, but that makes it awkward to handle the loaf at 500°F and with oven mitts. Undoubtedly I would burn myself seriously with such an arrangement.

For the fermentation process, you can use any large, clear plastic or glass container, but the container from King Arthur Flour or Breadtopia is especially convenient.

Two bowls lined with clean dish towels will work to hold the loaves during their final rise before baking, but woven bannetons with their special liners are very handy. They are available from Breadtopia.

To make it easier for me to follow Robertson’s instructions without ruining my pristine copy of his book with flour-covered hands, I have condensed the instructions to numbered steps on a sheet of paper that can be stuck on the refrigerator door. Here are those instructions. 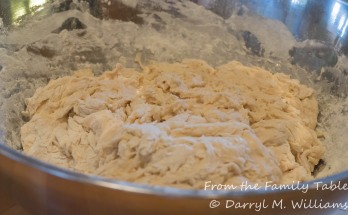 Dough mixed by hand in a large metal bowl

Dough starts the rising/fermentation process in the clear plastic container 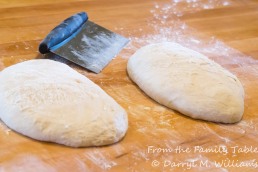 Dough cut in half and shaped into two loaves

Lodge combo-cooker. The bread is baked in the shallow half, and the heat and steam are provided by the deep half.

Finished loaf straight from the oven

The bread needs to cool before slicing (Hard to wait)

Sliced and ready to eat

The night before: Developing the leaven