“Open sesame,” was the phrase that the miscreants used to open their cave filled with treasure in the story, “Ali Baba and the Forty Thieves”. Popeye said, “Open sez me,” in a cartoon version of the story. It is not entirely clear whether the phrase relates to the spice, sesame, or whether it is a mistranslation of an Arabic phrase. What is certain is that sesame has been used in cuisines throughout the world and throughout history. Some say it is the first spice discovered, and it has been identified in ancient Egyptian tombs.

Say “benne wafers” and you immediately think of Charleston, South Carolina, where they have been part of the local cuisine for hundreds of years. The first time I ever ate one was many years ago in a charming restaurant on Church Street in the middle of that city.  In fact, I think that may have been the very best benne wafer I have ever had. It was a crispy little cracker, not unlike lavash, filled with toasted black and brown sesame seeds. The traditional story of how these tasty bites got their name is that the word “benne” is West African for sesame seeds that the black soon-to-be-slaves brought with them, perhaps even sewn into their clothes and subsequently used in their cooking. The sesame-rich foods found their way to the plantation house and soon became embedded in South Carolina cuisine. There are two versions of benne wafers: one that is sweet and one that is savory. I prefer the savory version. Whatever the real story of benne wafers, there is no doubt that the modern versions are delicious.

During a recent visit to Los Angeles, Susan and I paid a visit with Carol to the Surfas kitchen store in Culver City. There I found a bag of black sesame seeds which reminded me of those long-ago benne wafers in Charleston. Brown sesame seeds are, of course, ubiquitous, but black seeds are not as common, so my find seemed like the perfect chance to try my hand. The recipe is actually a version of a pie crust dough, so it is important to keep your ingredients chilled and not over mix the dough to make sure it is crisp and flaky when baked. 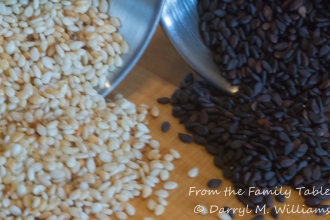