Probably everyone who reads this has a favorite zucchini bread recipe. And probably everyone who reads this has worn out that recipe in the last few weeks. “Abundance” is not the right word for our current supply of zucchini. They are in the fridge. They are packed away in the freezer. They are on the kitchen counter. And they just keep coming even though we don’t have a single plant in our garden.

Summer squashes make a light side dish for a summer supper on a hot day. But they shine in sweet breads and cakes. Like carrots, they make a moist tender cake or bread. You don’t need to peel them, just grate them in the big holes of a box grater, and pack them lightly in a two-cup measure without squeezing out any moisture.  Here is a good all-purpose zucchini bread recipe that I found in The Fannie Farmer Baking Book by Marion Cunningham (Alfred A. Knopf, New York, 1984, p. 553) I have substituted buttermilk for milk. 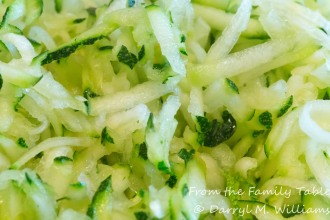 Just out of the oven

Cooling on the baking rack 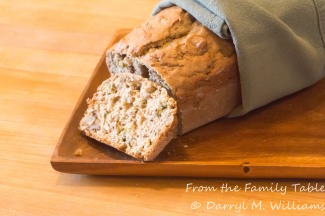