During our recent visit to Shreveport, we stopped at our old neighborhood haunt several times. The chicken-fried steaks, hamburgers, and fries were all tasty and much as we remembered them. But the main purpose of our frequent visits was to get a slice of one of their famous icebox pies. Strawberry is probably the most popular, but the fresh peach and coconut cream are not far behind. Although the names identify the fillings, the rest of the contents are very similar: a good down-home crust, a layer of custard, the fruit, and real whipped cream on top that hides the contents. To assist the serving staff, every pie has a slice of fruit plunked down in the middle of the whipped cream. You can buy a whole pie and take it home. Many folks do that, and we did, too, but an honest-to-goodness North Louisiana lunch consists of the plate special of the day, along with sweetened iced tea (Is there any other kind in Louisiana?) and a big slice of pie.

Sarah decided to create a new dessert for Rich Table based upon Strawn’s peach pie. Hers became a deconstructed version with dollops of custard and whipped cream topped with fresh peaches. Along side were pie-crust sables. It turned out to be a very sophisticated dessert that became a big hit the first night it appeared on the menu. 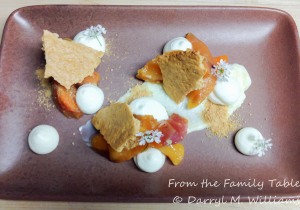 My version is a little more straightforward: cream pie topped with fresh peaches and whipped cream. Since peaches are in season right now, it is a perfect dessert for a patio meal at sunset. 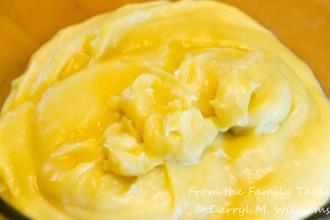 Fresh peaches from the farmers market

Peaches covering the pastry cream, ready for the whipped cream 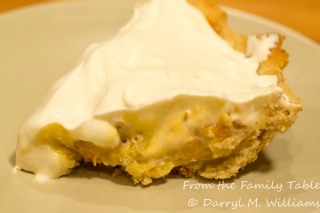 A slice of peach icebox pie