Today is the day of the amateur cook-off. The contestants have had the weekend to think about what they would cook, using either tomatoes or squash. There have been over seventy entrants, more than twice as many as anyone thought. Even at that, there were several who chose not to enter because they couldn’t think of anything to make with tomatoes or squash. One woman asked what the ingredients were. She declined tomato. When she found out the other choice was squash, she said, “I don’t do vegetables,” and left. So much for the farm-to-table movement.

Our guess was that there would be a lot of stewed tomatoes and okra (This is Louisiana, after all.) There would also be a lot of zucchini bread. We’ll see. Turn in time was 5 PM and at 3PM entries were already starting to arrive.

On the way to the place where the contest was to be held, we stopped for barbecue. Big D’s Barbecue has been smokin’ for over 30 years. It is quintessential Louisiana barbecue although too much ketchup for my taste. Still, it is worth the trip. I’ve included an image of their smoker and outdoor dining area (if you can stand the heat) along with their delivery vehicle. 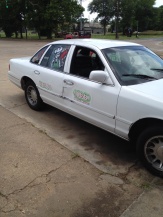 The contest turned out to be an exciting event. Over 70 cooks along with families showed up, so there were nearly 300 people jammed into the hall. The contestants were intense and clearly there to win. Contrary to our expectations, there was not a single serving of tomatoes and okra or zucchini bread, although a 10-year old girl made an elegant squash cake with an elaborate squash glaze. Choosing winners turned out to be more difficult than anyone had thought, but among the winners were a fancy pizza with lots of toppings, a tomato pie, and a squash appetizer. After the judges – Sarah, Evan, and Jason – had sampled everything. (Yes, you read that right.) everyone in the audience stormed the tables to get their own taste of the various entries. 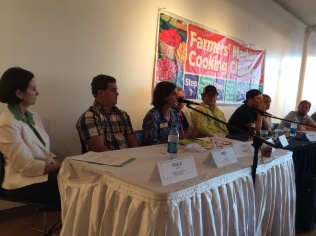 Following the announcement of the winners, Sarah and Evan’s dinner was served, and folks were still hungry! Then there was a lively panel of local food experts talking about the next steps toward getting Shreveport more farm-to-table friendly.

A long evening, but everyone went home well-fed and happy.