When I was considering this post, I thought, “Who doesn’t know how to make a breakfast burrito? More than that, who doesn’t have his or her own favorite?”  While all of that is probably true, I decided to write this post anyway.

Part of the reason is that I just made some breakfast burritos for my wife, who started out before dawn to drive more than 14 hours and more than half way through Texas to visit her sister in the Dallas-Fort Worth Metroplex and then to pick up our grandson from the airport to take him to Shreveport, Louisiana, where his parents will be involved in a two-week-long food and cooking demonstration. I will join them and plan to send posts about the events, including my daughter’s demonstration on how to butcher a whole hog! You read that right, and I plan to document the event for posterity.

The second reason for the post is that whenever I visit San Francisco, I always make breakfast burritos for Evan and Sarah as they rush out the door to the restaurant. After the birth of their new son, they have both gone on diets, so I have been told that there will be no more breakfast burritos. So I thought I needed to share with somebody.

Put the filling in the middle of the tortilla 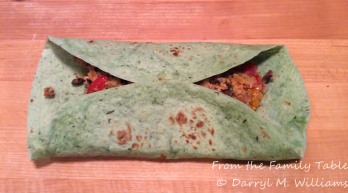 Fold over the two sides before rolling from one end