It’s May! And I think that Spring may be here. Lots of flowers are in bloom, but we have experienced freezing weather for the last week. As well, it is a month of birthdays: three of our circle of friends are having birthdays within a week of one another, so we are planning a mass celebration. I am making the dessert. My plan is to make takeoffs from Sarah’s Rich Table desserts – salted chocolate sablés and buttermilk panna cotta. Neither of these is an authentic recipe from Sarah (Do you think Dad could talk her out of trade secrets?) but they should be close. I also plan to gild the lily – it is Spring, remember? – with Mexican cajeta to pour over the panna cotta. 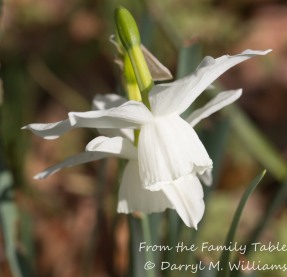 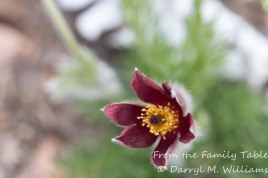 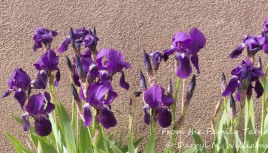 Irises against an adobe wall 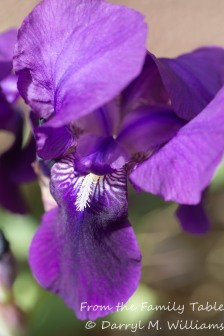 The recipe for cajeta comes from the superb cook book, Authentic Mexican, by Rick Bayless and Deann Groen Bayless (William Morrow and Co., New York, 1987, p 293). Even though the recipe calls for regular white sugar, in the past I have used piloncillo, the small cones of unrefined sugar that you can find in Mexican and Central American markets. This time, though, I decided to go with turbinado. The other decision was whether to use goat’s milk or cow’s milk. The authentic version calls for goat’s milk, and it is easy to buy from the stalls selling goat cheese at the farmers market or in cartons at health food groceries, so I went with that.

The only tricky things about the recipe are: (1) don’t let the mixture boil over when you add the baking soda, (2) stir occasionally so that it doesn’t burn on the bottom, and (3) watch for the change in the size of the bubbles as it boils, because that is the sign to let you know it’s almost done.

Cajeta is akin to caramel or butterscotch sauces, and it can be used in exactly the same way. It is delicious over ice cream, fruit, cake, etc. I guess you could just eat it straight out of the bowl, and some folks probably do. 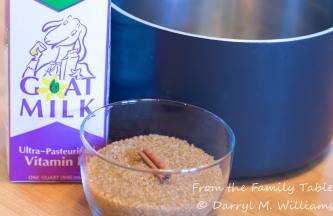 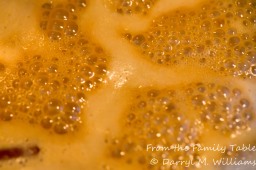 The bubbles get larger and glisten as the cooking nears completion 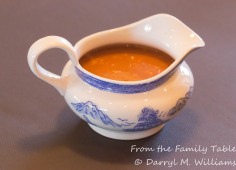 A pitcher of cajeta ready to serve